As we gear up to the start of the NFL season, Football Absurdity is going to bring you a comprehensive breakdown of every notable player that will be available in fantasy football drafts. The fantasy football community found itself flying into what I can only describe as “a massive tizzy” following Derrius Guice committing heinous acts and the Washington Football Team releasing him. After that happened, the Antonio Gibson Hype that quietly bubbled under the surface of fantasy football twitter exploded like the Purity Distilling Company in 1919. 2.3 million gallons of Antonio Gibson hype covered fantasy football twitter at a speed of 35 miles per hour. But who is the rookie out of Memphis getting all this buzz?

164 career touches in 38 collegiate games (hang onto that stat)

I don’t quite understand the Antonio Gibson buzz, and I say this as a guy who tapped him as a sleeper going into draft season. Now, people want to propel him into starter’s touches when there has been zero evidence of him getting the target and touch load that people desperately want him to have. Through four years at Junior College and at Memphis, he played in 38 games. In those 38 games, he had 164 touches. Those 164 touches come out to 4.3 touches per game throughout his entire collegiate career. Now, somehow, we are talking like he will get over 164 touches in one season, despite not doing that in more than twice as many games against inferior competition.

Washington’s running backs coach also said that “it’ll take time for Antonio Gibson to learn protections and to diagnose blitzes” while also heaping praise on Adrian Peterson and Peyton Barber. Yet, fantasy football twitter continues to bang the drum for him, and each drum strike seemingly drives his ADP up one pick.

I took a twitter poll, and the final results were overwhelmingly 51-79 targets and 51-100 rushes for Gibson. Let’s ignore that if he hits the top-end of these ranges, he’ll pass all his college touches. I took a look at rookies with each of those ranges (nobody had both) to get a final stat range. If he ends up in the top-third in statistical production with 51-79 targets and top-third among players with 51-100 rushes, he squeaks into the top-20. Again, that is if he is one of the more productive rookies rushing and receiving to ever get his projected volume. The more likely outcome is that his final fantasy points line comes out looking more like 2019 Tevin Coleman or Peyton Barber.

If Antonio Gibson’s ADP doesn’t flesh with my statements about his ADP, it’s because they don’t. The problem with measuring ADP and trends like this is that things change so rapidly that the old ADPs can’t keep up. Fantasy football analysts have boosted him into single-digit rounds and the ADP Balloon carrying him up into the seventh or eighth round wouldn’t surprise me. I’m ready to cut the string on Antonio Gibson. I just don’t see the professed upside being nearly as high as other people do. I am classifying Antonio Gibson in the class of players I am okay being wrong on at their price.

Gibson was a fun lottery ticket when you could take him at the end of your draft just to see what happens, but by taking him in single-digit rounds, you’re eschewing guys with a guaranteed path to playing time for an extreme longshot. He’s a player I am more than happy being wrong about.

Antonio Gibson successfully transitions into the NFL while learning two positions at the same time and doing both well enough to have sustainable fantasy football value. 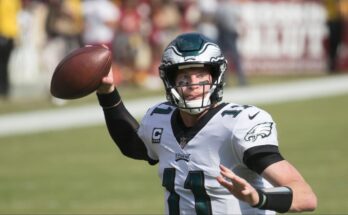