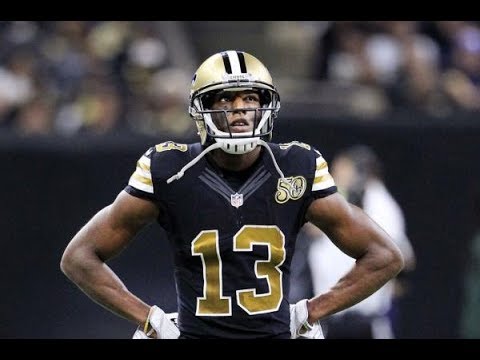 If you accept Drew Brees as your saint and savior, then this fantasy football Michael Thomas player profile is for you. As we gear up to the start of the NFL season, Football Absurdity is going to bring you a comprehensive breakdown of every notable player that will be available in fantasy football drafts.  When you don’t see us talking about Christine Michael or Mike Davis, don’t get mad at us for neglecting your favorite sleeper.  Get mad at yourself for having bad taste in football players.  We are only focusing on the top-rated running backs in standard scoring and points per game leagues.

With my player profiles, I’ve decided only to go back and look at their fantasy scoring for three years.  I could show you lists from earlier, but at the skill positions, I think three years is plenty to see what a player does.  I’ve also added a chart for their usage over that time span.  We will try to determine, based on those two factors, where the best wide receiver value lies.

Overview: Michael Thomas has the makings of becoming a fantasy monster.   He was a top-five PPR receiver last year and had the sixth most targets of any receiver in the NFL.  The interesting thing is I think his touchdown numbers were actually sabotaged last year by his future hall-of-fame quarterback, Drew Brees.  Last year, I wrote about how Drew Brees was having one of the best seasons of his career and nobody realized it.  The problem was that every time Mark Ingram or Alvin Kamara touched the ball in the red zone, they scored.   Because of this, Drew Brees saw his lowest touchdown totals in ten years by a significant margin.  Not because he was bad, but because he was so good.  I expect these numbers to level out this year, and the player who will benefit the most from this is Michael Thomas.  Heck, even with Brees having a down year, Michael Thomas was one of the most consistent receivers in football last year, finishing top 24 in 12 of his 16 games played.

Strategy: My strategy with Michael Thomas is simple.  I will take him if he falls to me in the second.  The only receivers I like more than him are Antonio Brown, Julio Jones, DeAndre Hopkins and Odell Beckham, Jr.

Ceiling: If the Saints do improve their passing game in the red zone this year,  Michael Thomas can easily end the year as a top-five receiver.

Floor:  What will actually happen is that I will be wrong about Drew Brees and last year was the beginning of the end for him.  His regression will be the end of Michael Thomas’ fantasy value and your roster will regress to the bottom of your league.