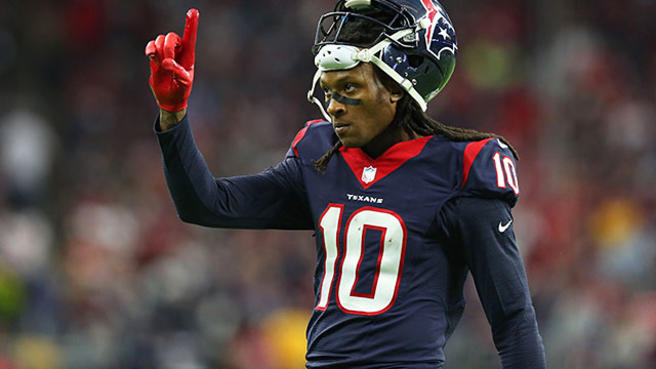 If you only want the best wide receivers on your team, then this fantasy football DeAndre Hopkins player profile is for you. As we gear up to the start of the NFL season, Football Absurdity is going to bring you a comprehensive breakdown of every notable player that will be available in fantasy football drafts.  When you don’t see us talking about Christine Michael or Mike Davis, don’t get mad at us for neglecting your favorite sleeper.  Get mad at yourself for having bad taste in football players.  We are only focusing on the top-rated running backs in standard scoring and points per game leagues.

Overview: DeAndre Hopkins is the number two rated receiver in fantasy football this year.  However, over the last three years, he has had a catch rate of 55.1%.  Hopkins is being talked about in the same breath as Antonio Brown, but Brown caught the ball at the ungodly rate of 67.3% over the past three years, with similar volume.  I know what you are thinking.  “Waleed, what was Hopkin’s catch rate when he had a non-garbage quarterback throwing him the football?” I’m glad you asked me this, hypothetical Football Absurdity reader.  In his first seven games with Deshaun Watson starting, his catch rate was 59.2%, which is a noticeable improvement.  However, the flip side of this is that his target share went down significantly.  In 2017 with Watson, he had 8.5 targets and 5 catches per game.  Without him, he had 12.6 targets per game and 6.3 catches per game.  My concern is that Hopkins has been at his best as a volume play and while Watson might make him a better overall receiver, it might not translate to fantasy football.

Strategy: To be clear, I think DeAndre Hopkins is one of the best receivers in football.  My issue with his grading right now is that in a lot of circles, people are talking about Antonio Brown and DeAndre Hopkins in the same breath, which is crazy.  Hopkins should be rightly ranked in the Odell Beckham and Julio Jones tier of receivers.  And I am not sure I prefer him over running backs with similar ADP, such as Kareem Hunt, Leonard Fournette,  or Melvin Gordon.

Ceiling:  If DeAndre Hopkins ended the year as the top receiver in fantasy football, nobody will be surprised.  He has the ability.

Floor:   What will actually happen is Watson won’t live up to his current ADP. He will be so bad, fans will yearn for Brock Osweiler.  Because of this, DeAndre Hopkins will revert to his 2016 form and your team will tank because you were dumb enough to take Hopkins over the 2017 NFL rushing leader when I clearly told you to not to do that!  Why won’t you listen to me?  I’m doing my best here, but all I keep getting from you is an attitude.  I was never this way to NFL experts when I was your age.

For more 2018 fantasy football player profiles, check out these links: