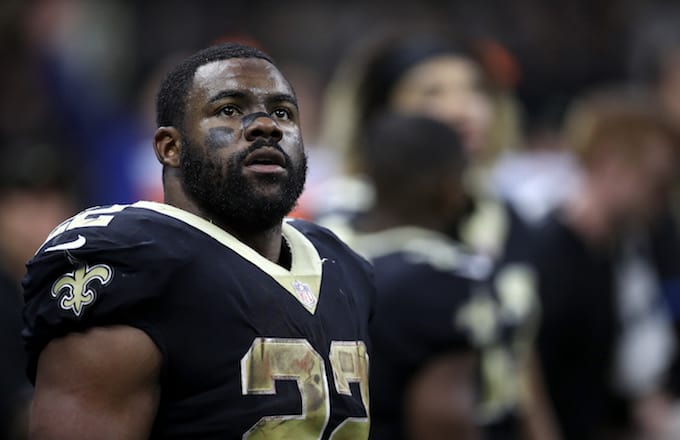 Overview: Mark Ingram messed up.  He failed a drug test and is going to miss the first four games for violating the NFL’s performance-enhancing drug policy.  And nothing is suffering more than his ADP.  Hasn’t his value suffered enough?  The man was an RB1 the last three years in all formats.  The goods news for you is that his suffering will bring you joy.  Let’s play a little game.  Do you know what happens if you take Mark Ingram’s 2017 fantasy numbers and multiply it by 75%?  He still remains an RB1.  If you do the same for 2016 and 2015, Ingram falls to an RB2.   And you can get Mark Ingram in the late-fourth/early-fifth rounds.  That sounds like one of the best value plays of 2018.  Ingram is also in a contract year, meaning that he is playing for his next paycheck.

Strategy: I love Alvin Kamara, but Mark Ingram’s value is undeniable at his current ADP.  Getting a guy who has consistently been an RB1 the last three years in the fifth round is a deal I will take every time!  I don’t think Ingram will win his starting job back from Kamara.  They’ve invested too much in Kamara for him to not get every chance to start.  However, I also think it is possible the Saints decide since they are losing him next year, to get as many miles on that car before they sell it.  I just know that Ingram, at his current ADP, is perhaps the best running back value in fantasy football for 2018.

Ceiling: I think Ingram could end the year as a low-end RB1 for total points on the season, but be a high-end RB1 on a points per game basis.  He will win people their leagues this year.

Floor:  What will actually happen is while Mark Ingram is suspended, he will fail another drug test and that will be the beginning of the end for him.  Months later, we will get a GQ article talking about his issues with addiction.