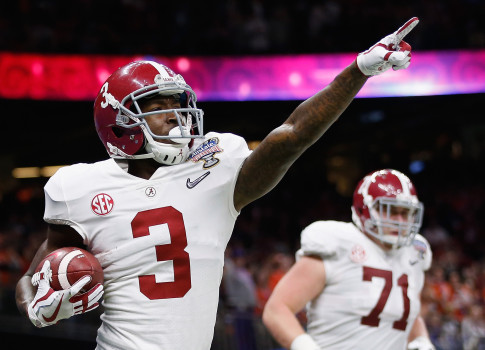 Why do we watch the NFL draft?  Because we want to believe that our teams can get better.  Even though, in our heart of hearts, we gave up on hope a long time ago.  So sit back and let Football Absurdity lie to you about how this time your team will draft better.  We promise to tell you that your team isn’t going to royally screw up the draft like they do every year, even though they probably will.  We here at Football Absurdity do draft coverage the right way.  By completely overreacting to each and every player.  So let us tell you why every player is the best and the worst in our 2018 NFL Draft Wide Receiver edition!

Overview:  Considered by many to be the best receiver in this class.  The nicest thing that is being said about him is that he is very mature for his 23 years of age and that he isn’t as good a prospect as Julio Jones or Amari Cooper.  He is a great route runner and very fluid athlete.

Ceiling: Ridley reminds me of Jordy Nelson.  He is faster than he looks and there are no wasted motions in his play.  He just suddenly appears as if by magic and the next thing you know he has scored while you are left wondering what the hell just happened.

Floor:  What will actually happen is Calvin Ridley will be a poor man’s Lee Evans.  And there is receiver poorer than Lee Evans.

Overview: DJ Moore is athletic, fast and sure-handed.  However, he is projected by many to be too small to play outside and will likely be a slot receiver in the NFL.  If you needed any indication of how weak this years receiver class is, the number two prospect is a slot receiver.

Ceiling: If teams are lucky, DJ Moore will have the career trajectory of Jarvis Landry.  Landry has been an all-time great at the slot, with more receptions in his first four years than any player in NFL history.

Floor:  What will actually happen is he will be Cordarrelle Patterson.  An exciting athlete who has no idea what he is doing.

Overview: Courtland Sutton might be the most exciting athlete at wide receiver in this draft.  He is big and strong, with the ability to make contested catches.  He lacks breakaway speed and has trouble with separation.

Ceiling: If Sutton works out, he could be a Demaryius Thomas type player.  Just a big, physical player who imposes his will on opposing defenses.

Floor: He is probably going to end up being Mike Williams.  Which one, you ask?  Does it matter?  They are all big receivers who can’t get separation and end up busting once they get to the NFL.

Overview: Christian Kirk is a small, quick receiver who also has an impact in the return game.  This receiver class is so boring, I feel asleep twice at my keyboard evaluating Kirk.

Ceiling: If a team drafts Kirk, they are hoping they will get someone similar to Randell Cobb.  A guy who you can put anywhere on the field and who can help with special teams and make plays.

Floor: Teams who draft Kirk will actually end up with Tavon Austin.  A fluid, dynamic athlete who doesn’t know how to play football.  And whoever drafts him will probably pay him a 42 million dollar contract, because they don’t want other teams to think they were dumb for drafting him.

Overview: DJ Chark is one of the most interesting prospects in the NFL draft.  He has ideal size, speed and acceleration.  The only problem is he plays for LSU, a passing offense that was so terrible, nobody is quite sure he can play football.

Ceiling: If he hits, Chark could end up being a faster Allen Robinson.  A big-bodied, physical receiver with breakaway speed.

Floor:  He will probably end up being Troy Williamson.  A physical specimen of a man who had to keep getting work done on his vision, because he couldn’t figure out how to catch a football.