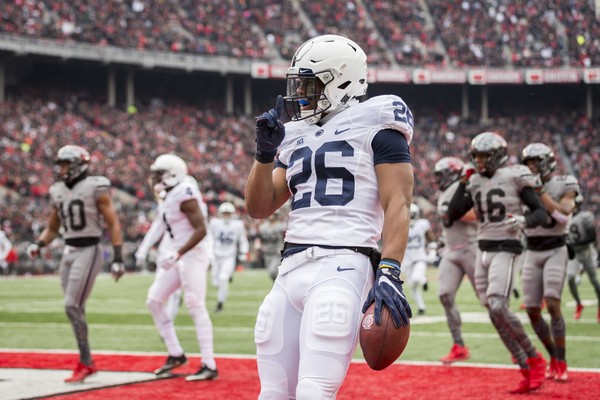 The NFL draft is here and our fans are yearning for all the draft coverage they can handle.  The good news is that Football Absurdity has extensive draft breakdowns for every position.  The bad news is we don’t know what we’re talking about.  The worst news is that neither does anyone else. That’s why we do draft coverage the right way.  By completely overreacting to each and every player.  So let us tell you why every player is the best and the worst in our 2018 NFL Draft Running Back edition!

Ceiling: There is a lot of similarities to Saquon Barkley and David Johnson.  I’m not sure there is a better receiver at the running back position in the NFL than David Johnson, but Barkley has that potential.  Barkley’s game film shows a man whose talent could dominate and be a three down back.

Floor:  What will actually happen is Saquon Barkley will end up becoming Trent Richardson.  A seemingly superb athlete who can’t miss as a prospect, but in actuality can’t make defenses miss, so always gets tackled behind the line of scrimmage.  A surefire hit who can’t hit the hole.

Overview: The word used to describe Derrius Guice is angry.  He is an angry runner.  He loves to punish opposing teams and he will fight for every yard.

Ceiling:  If Derrius Guice pans out, he could be a Marshawn Lynch type talent.  He is a player who can impose his will on other teams and maybe even land an endorsement deal with some type of candy.

Floor:  His floor is actually OJ Simpson.  Not NFL OJ Simpson, but regular OJ Simpson.  The part where he gets too angry, murders some people and ends up in jail.  There is such a thing as running too angry.  Especially when you are in your car.

Overview: Sony Michel was a focal point of the SEC Champion Georgia offense.  He is a north-south runner who has ideal size for the position.  He is a very workmanlike back.

Ceiling: People see a lot of Kareem Hunt when they look at Sony Michel.  Teams will be very happy if Michel shows the kind of production that Hunt showed his rookie season.

Floor: What will actually happen is he will have the career of Knowshon Moreno.  Teams will end up crying over the pick as much as Moreno cried during the national anthem.

Overview: Jones is a slasher who is patient when it comes to letting plays develop and trusts his blocking.  He is electric in the open field and a great pass-catcher.  He is a bit light, which concerns some scouts.  Jones is going to excite you up until the moment he dies a heroes death on the football field.

Ceiling: If Jones plays like he did in college, he could develop into a Jamaal Charles type player.  A dynamic playmaker who is a home run threat every time he touches the football.

Floor: What will actually happen is Jones will have the same athleticism Batman had immediately after Bane broke his back.

Overview: Nick Chubb is a one-cut runner with a low center of gravity.  Along with Sony Michel, he helped take Georgia to a BCS playoff.  But most important of all, his name sounds like he almost has an erection.

Ceiling: Nick Chubb has the potential to be a Frank Gore type player.  Just a reliable all-purpose back who doesn’t excel at anything in particular, but does everything well.

Floor: What Nick Chubb will actually end up being is Lendale White.  He will spend more time at buffet lines than on the field, eventually rolling his way to retirement.

Overview: I know I said this was only five running back evaluations.  Consider this a bonus, like finding a penny on the ground.  (I’m so sorry.)  A lot of coverage has Rashaad Penny as a top five prospect, so I felt bad leaving him off the board. He is a patient runner who lacks burst, but had a great Kid N Play haircut.

Ceiling: If Penny pans out, he could be a Lamar Miller type player.  Which basically means that you will see flashes that really excite you about what he can do on the field, but for some reason the team that drafts him never gives him the freaking football.  You know in your heart of hearts he could be great, but that stupid coaching staff just keeps holding him back!

Floor: What will actually happen is that he will become Rashard Mendenhall.  Steelers fans knew in their heart of hearts that he would be great until he actually started playing.