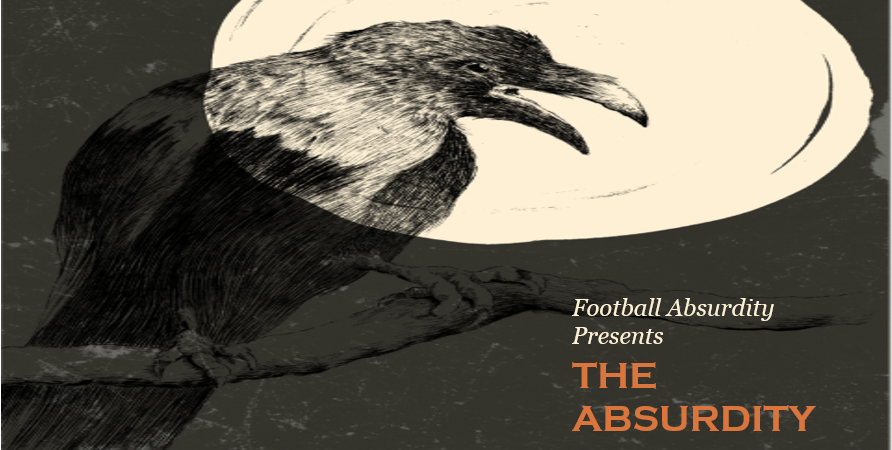 Welcome to The Absurdity Horror.  This Halloween, we will be sharing with you the scariest football ghost story of all, the tale of Colin Kaepernick.   Football Absurdity is proud to present The Ragin’.

Once there was a certain theory, where protests begat a query,
Over many a faint and questionable report of aggressive force—
While Kaep noted, anthem playing, suddenly there came a braying,
As of someone madly blaming, blaming at this kneeling bore.
“Tis just confusion” Kaep muttered, “Calling me a kneeling bore—
Only this and nothing more.”

Ah, distinctly Kaep remembered before the games of September;
How each separate protest which made mad the fans even more.
Eagerly Kaep wished for justice;—vainly towards a moral compass
From the news so full of sorrow—of Rice and Gray and more—
Michael Brown and Philando Castile, Walter Scott and many more—
Nameless here for evermore.

Presently his soul grew stronger; hesitating then no longer,
“Sir,” said Kaep, “or Madam, your understanding I implore;
But that fact is I was asking, why so many questions lacking,
And now anger swiftly stacking, stacking at my given chore,
That I scarce was sure I hurt you”—hurt you with my kneeling chore, —
Anger there and nothing more.

Long into that anthem peering, long Kaep knelt there wondering, fearing,
Never dreaming how his chosen message they would all deplore;
But their anger was unbroken, and their fury would be spoken,
And the only thought of chokin’, they would listen to no more,
Then Kaep wondering why Eric Garner’s tale made the fans so sore;—
Mostly this and nothing more.

Back into the stadium turning, all these questions in him churning,
Soon again, Kaep heard a snapping somewhat louder than before,
“Surely” Kaep said, “Surely there is something I can explain once more;
Let me think, then, what there is that I can make more clear for—
Those who rage at such a moment and the NFL forswore;—
I will explain and nothing more!”

So Kaep stepped to the podium, where he was met with odium,
Where he faced the baleful Ragin’ of all those fans he made sore;
Kaep explained why he was kneeling, about a system so unfeeling;
That officers could harm the poor and still be paid leave for shore—
Despite the damage they had wrought, they still got paid leave for shore—
This is all that Kaep deplored.

Much Kaep marvelled how uneasy, how reactions so unseemly,
Viewed his protests as obscenely and how now he was abhorred;
Kaep now was met with a wildness that hinted at future violence,
Yet was met with only silence, the issues he would explore—
How would one make any progress when such protests were ignored;—
Quoth the Ragin’ “Nevermore.”

But the Ragin’ knew that mostly, thus the ratings would dip slowly,
For the NFL forever unless this protest were forswore;
Roger Goodell then did utter, “There’s no protest dip he sputtered,
Football’s popular he stuttered, popular as e’er before—
No matter what we do they’ll come, come back as they have before.”
Quoth the Ragin’ “Nevermore.”

Startled at the malice spoken, and the threat of their sport broken,
If we do not enact changes, what fate for us is in store;
Now there were some worried masters, courting an untold disaster,
For the protests just came faster, threatening their coffer store—
Protests could not be allowed to empty out their coffer store;—
Quote the Ragin’ “Nevermore.”

And the Ragin’, never yielding, while at home Kaep still is kneeling,
Wondering inside his manor what the future has in store;
Still reports have not subsided, though owners link arms united,
Tales of blackballing confided, speak the end of this kneeling bore—
It already was determined, the future of this kneeling bore;—
Shall play football—nevermore!

If you’ve enjoyed our football stories, some of these are not so gory!

3 Comments on “The Ragin’ — The Tale of Colin Kaepernick”