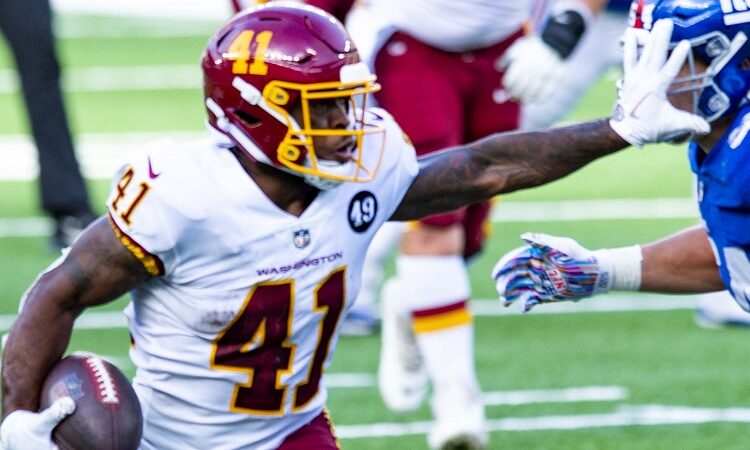 As we gear up to the start of the NFL season, Football Absurdity is going to bring you a comprehensive breakdown of every notable player that will be available in fantasy football drafts. It was a chilly evening as the low fog crept past my office window. Soon it was mixed with a deep exhalation from my Chesterfield. I was just about to close up shop when a shadow appeared at my doorway. It was known wiseguy Jeff Krisko. He needed me to tail a guy by the name of McKissic. The deed was dirty but the money was clean so I took the job.

My name is Evan Hoovler, P.I.

If you said you saw McKissic’s 80-catch 2020 season coming, I’d introduce you to the business end of my heater. You’d be a liar, a no-good mook. McKissic’s catch total was second only to known hatchetman Alvin Kamara.

They call it Washington, but anyone who’s ever lived there knows it can be downright filthy.  I followed McKissic to the speakeasy: Even though it was on Broad Street the clientele were all men. In walked a dame with legs that went only halfway up. She took a seat next to me and placed a Lucky in her quellazaire, which was a word I had to look up later. Taking a drag she said, “JD McKissic was 17th overall in PPR last year. He was top 24 in half PPR.”

Her mouth said one thing but her eyes told a different story: That it was real hard to express statistics using slang from film noir. I nodded and asked to dish about the Cat in standard (non-ppr) leagues. Just then the House Dick came over. He told me to stop talking about J.D. McKissic in standard leagues unless I wanted a squirt of lead.

“It’s okay,” said the skirt, “McKissic actually finished 34th in non-PPR leagues, so he’s a flex-worthy Egg. The two real question marks are the further emergence of Antonio Gibson and the replacement at QB of Ryan Fitzpatrick, ya dig?”

Auction Value: $2
Draft Ranking: Find out for your league settings in a Beersheet!

Listen here, pal: You give McKissic the pass in a double-digit round and your fantasy team will end up sleeping with the fishes. The only way he’s not ending up on my fantasy team is if some other manager slipped me the ol’ Mickey Finn. He’s got great bye-week value, but that’s not the reason he’s your meat. A high floor in PPR or even half-PPR leagues is the bees’ knees. Don’t put the screws on Ryan Fitzpatrick: Any dropoff on passing to the backs should be more than made up for in scoring opportunities.

At an auction, he’s gone for a berry every single time (that’s $1). But I wouldn’t look at you sideways for bidding up to a fin (that’s $5). McKissic is one of those values that jamokes overlook because his ceiling is lower. Drop the hammer on McKissic until the market catches up.

McKissic repeats his start-worthy 2020 season. Every other league owner becomes your Butter and Egg man.

McKissic is only startable during bye weeks. That’s enough to keep everyone’s yap trapped at those values.