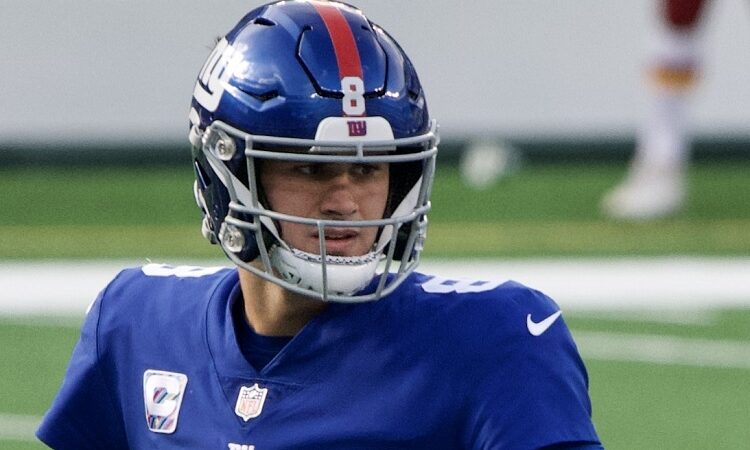 As we gear up to the start of the NFL season, Football Absurdity is going to bring you a comprehensive breakdown of every notable player that will be available in fantasy football drafts. Daniel Jones finished as QB24 last year, but now he has some quality new receivers. Does this dramatically increase his fantasy value? Does putting a spiffy bow tie on a dead deer dramatically increase its value to vultures?

After drafting him 6th overall in 2019 it’s clearly make-it or take-it-away time for the Giants and Jones. Because of this, they have added a lot of new pieces. The shiniest is talented wideout Kenny Golladay. They also signed John Ross and Kyle Rudolph and drafted Kadarius Toney in the first round. All that adds up to this: If Jones struggles coming out of the gate, animal control officials will be swamped with dealing with the legions of vultures that fly in from up to hundreds of miles away to roost in the rafters of Met Life stadium.

That’s not the only offensive potential there. The Giants still have talented-but-made-of-glass tight end, Evan Engram. Saquon Barkley should be healthy (maybe?) However, the 2021 offensive line is currently ranked dead last by Pro Football Focus. This whole thing is a house of cards on shaky wheels. One big bump and Met Life will have to change its mascot from Snoopy to Woodstock and start running commercials where the yellow bird feasts on the flesh of Daniel Jones.

Daniel Jones Auction Value: $0
Draft Ranking: Find out for your league settings in a Beersheet!

Look, people, if you feel even the slightest inkling to draft Jones in 1-QB leagues, I hope you enjoyed your childhood and current existence in the NYC area. But don’t do it. okay? Don’t draft the fantasy equivalent of a coyote crawling through the desert while wearing away from dehydration. It’s all vulture imagery: that’s my gimmick for this player profile.

In 2-QB leagues you gotta do what you gotta do, but just try to make sure Jones is your QB3 and save him for bye/injury weeks. There’s a reasonable chance he’s riding the pines by mid-season. With, uh, a vulture sitting next to him. A talking vulture that constantly haunts him by asking “how ya feelin’ buddy?”

Daniel Jones figures it all out and becomes a top 18 QB. I don’t see a path to finishing top 12, not with that O-Line and Saquon vulturing touchdowns.

Jones is benched for life. The giants have to eat enormous amounts of crow for their incredible reach drafting him. Crow is like a vulture, right?