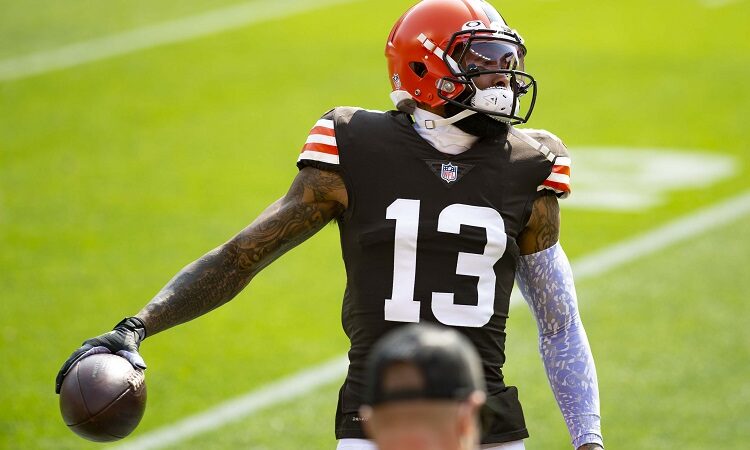 As we gear up to the start of the NFL season, Football Absurdity is going to bring you a comprehensive breakdown of every notable player that will be available in fantasy football drafts. Odell Beckham was willing to relocate to Cleveland, probably to get away from Danny Dimes. Does his 2020 injury have his draft stock too low? Additionally, does anyone want to buy any of these things I stole?

Extrapolated to 16 games, Odell’s 6 non-injured games would have become 850 yards and 8 touchdowns. That would have placed him firmly at WR27… not great. In 2019, his first year with the Browns, he played 16 games and ended up WR26, so the story checks out. However, Cleveland’s offense took a leap forward in 2020, scoring 408 points versus the 335 they scored in 2019. Odell is known for scoring, so it’s an important data point to factor in. I have, like, half a Miller Lite I swiped at a party I wasn’t invited to. $5 OBO.

The Browns are committed to the run, obviously. They spent the #10 overall draft pick on an offensive tackle. Still, it should be noted that the NFL’s top-rated offensive line could get even better, which would benefit everyone. However, there are many mouths to feed and the Browns were bottom ten in terms of passing yards last year. I stole a chicken from the Costco. $5 firm.

Odell Beckham, Jr. Auction Value: $4
Draft Ranking: Find out for your league settings in a Beersheet!

It’s pretty obvious that spending a small amount of draft capital to acquire Odell is a no-brainer. I wouldn’t reach for him in snake drafts, because that means grabbing him in round 5. Round 5 is for RB2’s and WR2’s, not a WR who will likely be flex-able at best. But if he falls to the back of the 6th round or later, he’s not a bad high-floor-with-potentially-high-ceiling grab. Just like I grabbed that sign outside Tony’s Barbershop that says “Tony’s Barbershop.” $5 OBO.

At an auction, I’m seeing him go for $2-$6 about 2/3rds of my mocks, and in the rest, he is going for low teens. He’s in the group of guys where you should go, “hey, I’ll throw a small amount of money to get him on my bench.” Low teens isn’t bench money, though, it’s WR2 money if you wait long enough for the wide receiver market to plummet (it always does). I have a recycle bin I took from my neighbor (he just left it outside, the moron). $5 OBO, probably has a few nickels worth of recyclables in it.

OBJ falls to you, Baker Mayfield takes a step forward. Beckham ends up as a passable WR2. You make a mint from this old recliner I found on the sidewalk: Haven’t even checked it for loose change. $5 OBO.

You reach for OBJ in the fifth round or for $teens. He’s washed and gives you as many 36th-48th finishes as he does 12th-36ths. You don’t take advantage of my $5 offer for selling you some dentures (I’m a really good pickpocket).