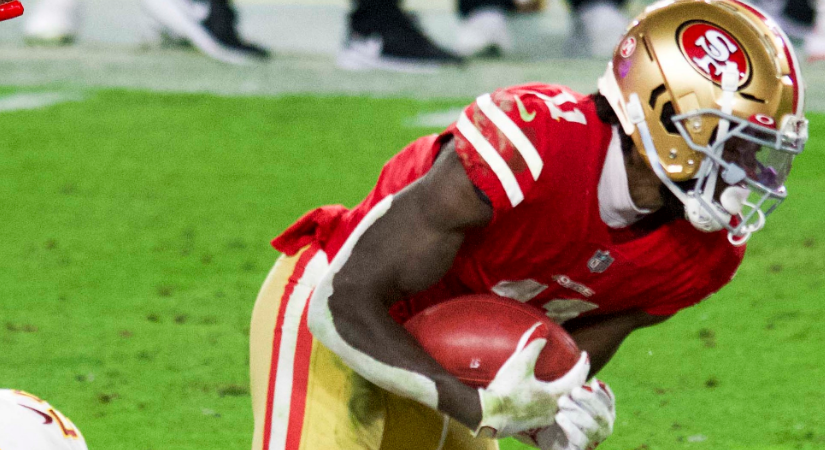 It’s that time of year once again! Football Absurdity will bring you a breakdown of every notable fantasy football-relevant player throughout June, July, and August. We’ve run through 20 quarterbacks and 40 running backs; that means it’s time to get to the deepest and most varied position! That’s right, we’re on to the wide receivers! In each of the last three seasons, a 49ers pass-catcher kicked the door down on fantasy football. Is 2021 Brandon Aiyuk going to be more like 2019 George Kittle, or 2020 Deebo Samuel in his follow-up campaign?

Now, before I start this player profile, I feel like I have to disclose some information: I’m a 49ers fan. I’ve had season tickets since Candlestick, and before the pandemic, the only game I missed at Levi’s Stadium was a New Years Day game that I was too hungover for when the 49ers were 2-14. So, I’ve paid my dues.

Brandon Aiyuk was really good last year, despite bouts with the COVID-19 list, and two inactive games outside of that (I won’t begrudge him the week 17 bubble wrap game, where half the 49ers were inactive). In the other games, he paced out to 1,100 yards and 10 touchdowns. That’s crazy good, especially for a rookie! But, there’s some hidden stuff in there. Namely, two rushes in weeks three and four. We all know the week four rush, it was the 38 yarder wherein Aiyuk leapfrogged an Eagle en route to a touchdown. He also kicked in a 19-yard touchdown run the week prior, when the 49ers were absolutely blasting the New York Giants into the sun. The run against the Giants was impressive… blocking. Kyle Juszczyk plowed the road for Aiyuk on that run. He had to punch it in, but it wasn’t something spectacular like the Eagles leap.

All this is to say that these were two of his seven carries in his rookie year. The Giants run also came in a game without Deebo Samuel or George Kittle. People like to throw in those rushes into prorations when they were both anomalous; rushing was not a significant portion of his game. His 57 rushing yards on those two runs account for 89% of his fantasy points scored through rushes on the season. Just please, be cautious about Aiyuk.

Brandon Aiyuk Auction Value: $5
Draft Ranking: Find out for your league settings in a Beersheet!

Honestly, though? All of that seems to be a lot of bluster as to why he should “smash” his draft spot. I don’t see him smashing his draft spot, just like I didn’t see Deebo Samuel smashing his draft spot. The 49ers simply do not pass the ball enough for them to reliably divvy up targets to Kittle, Deebo, and Aiyuk. They played four games together, and Kittle had nearly as many targets as Deebo and Aiyuk combined in those four contests.

That’s a problem that goes back to George Kittle’s initial breakout. Kittle is the player the 49ers build their offense around, and the rest of the team fills in around the edges. The 49ers throw the ball to wide receivers 14.6 times per game with George Kittle in the lineup. Assuming that gets split between just Deebo Samuel and Brandon Aiyuk, that comes out to just about 7.3 targets per game for each of them. That’s not a bad workload, for a WR2. But, people have visions of them as WR1s in their heads. Do not have that vision in your head.

If you want more on that split, you can check out a whole article about it here.

But, I do concede we saw some high heights from Aiyuk. From week seven through fifteen, he averaged 93.4 yards per game, on 7.5 receptions. The main problem? 11.5 targets per game. As you saw above, I doubt that.