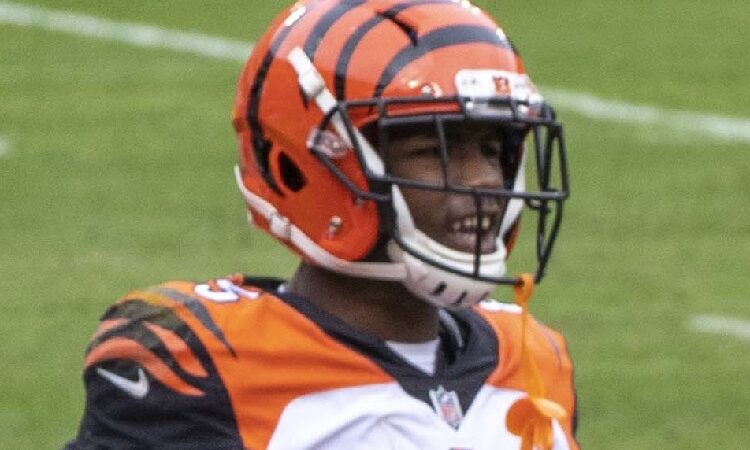 It’s that time of year once again! Football Absurdity will bring you a breakdown of every notable fantasy football-relevant player throughout June, July, and August. We continue with the wide receivers. Tee Higgins quietly had himself a breakout 2021 campaign, mostly because he had to do it while playing second fiddle to Ja’Marr Chase. First Fiddle is still there, but the Bengals’ beefed-up offensive line should give Joe Burrow more time to throw. Are we going to lean into Tee Higgins, a team’s WR2, as early in the draft as he’s going? Let’s dive in with his 2022 fantasy football player profile!

Tee Higgins broke out last season, and all it took was the Bengals getting one of the best young wide receiver prospects in recent memory, with Ja’Marr Chase coming in from LSU. This allowed Higgins to get the #2 cornerback on the field without any real loss in opportunity share. In fact, Higgins’ target share increased from 19% his rookie season to nearly 24% last season. His air yards share also jumped from 27% to 36%. His per-target production also leaped up last season, going from 1.8 fantasy points per target to 2 fantasy points per target. That is to say, that the Ja’Marr Chase of it all only helped Higgins, as Higgins is a good football player in his own right.

Things should continue to get better for Higgins this season due to the increase in talent across the offensive line for the Bengals. While Joe Burrow is an incredible talent while pressured (first in pressured catchable pass rate in 2021, per PlayerProfiler.com), an increased offensive line can only help Higgins find more consistency. While 9 of Higgins’ 14 games in 2021 had him finishing inside the top-36, those finishes were equally distributed among the top five, the WR2 ranks, and the WR3 ranks. He had no non-top-five WR games, meaning that it was boom games that found him in the top five.

Tee Higgins Salary Cap Value: $14
Draft Ranking: Find out for your league settings in a Beersheet!

So, that’s why I have trouble with Tee Higgins for 2022, he just feels like his rank is borne out of exuberance rather than a rational evaluation of his upside. Don’t get me wrong, I think Tee Higgins is great, but it’s the ADP and AAV (average auction value) that have me questioning whether or not Higgins is a good fantasy football investment. He’s the eleventh-most expensive wide receiver ($27), and I just can’t countenance spending those dollars on a guy who is far wobblier than Keenan Allen, who is literally $1 more, by AAV.

In snake drafts, the ADP shakes out in a more rational way, with Mike Evans and Keenan Allen going off the board before Higgins. But, to be honest, I would rather have Diontae Johnson at that spot, and he goes just eight picks later. And if I don’t want to go for Diontae Johnson, I’m also looking at Kyle Pitts, Justin Herbert, and Leonard Fournette with that pick over Higgins. With that in mind, I don’t have much interest in going after Tee Higgins in snake drafts, either.

Higgins falls into a value vacuum for me, a position where despite liking the player, there are players at better values around him, and players I honestly like more than Higgins. So, because of this, I doubt I have any Tee Higgins on my 2022 fantasy football teams.

Tee Higgins continues his pace from last year and grows alongside the rest of the Bengals’ offense. He finishes as WR8.

Tee Higgins gets hurt early in the season and gets Wally Pipped by Tyler Boyd who, apparently, still exists and is on the roster.