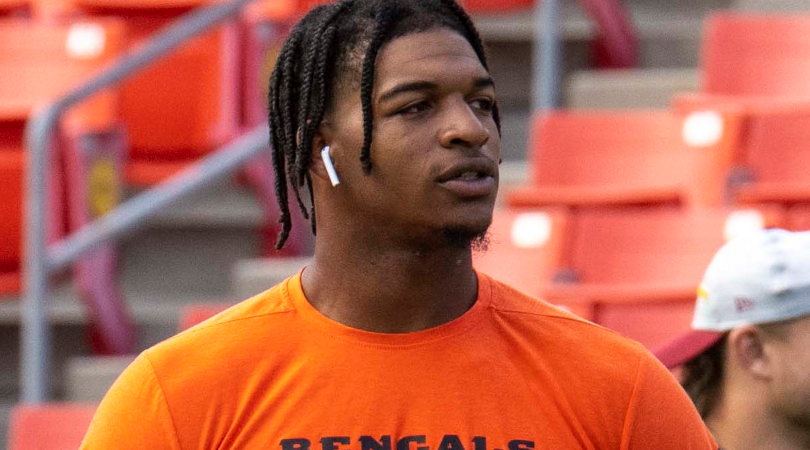 It’s that time of year once again! Football Absurdity will bring you a breakdown of every notable fantasy football-relevant player throughout June, July, and August. We continue with the wide receivers. Ja’Marr Chase had a lot of question marks headed into his rookie campaign: would his year off cause him issues? Could he pick right back up with Joe Burrow? Can he handle the football not having big, white stripes (that last one was his own fault)? Now headed into 2022, we have just one question for Ja’Marr Chase: just how good can this guy be? Let’s take a look in his 2022 fantasy football player profile!

All of that in a player that just turned 22 and still has his college QB throwing him the football, and won’t be in the midst of a nearly two-year football absence due to missing a season thanks to COVID-19. Chase is one of a handful of receivers who have a realistic shot at the WR1 slot when all is said and done, though I do have to say that Chase has some issues that the other two guys don’t really have. Namely, his teammates are too good. While Cooper Kupp gets to contend with Allen Robinson, he replaces both Odell Beckham and Robert Woods. And Adam Thielen is a fine football player, but he’s on par with Tyler Boyd.

I say Tyler Boyd specifically because Boyd is the third-best receiver on the Bengals, behind Chase and Tee Higgins. While I don’t doubt Chase’s talent or the offense in the slightest, Chase had just 128 targets last season, mostly because Tee Higgins came into his own as a top-flight wide receiver in his own right. There are no such target issues for Kupp or Jefferson. That’s pretty much the extent of my trepidation, however, as Chase still finished with 1,455 yards and 13 touchdowns on his 128 targets, thanks to averaging a whopping 11.4 yards per target.

Ja’Marr Chase Salary Cap Value: $55
Draft Ranking: Find out for your league settings in a Beersheet! (coming in early July)

Chase goes alongside Cooper Kupp ($62) and Justin Jefferson ($58) at $56. I say just behind them because the dropoff from Chase to Adams is $7, and greater than the difference in this whole tier. That having been said, if you want Chase, you better be ready to overpay or be in position, through ritual sacrifice or the luck of the order, to make sure he comes off the board after Kupp and before Jefferson. Chase, Kupp, and Jefferson being in a tier to themselves isn’t me breaking new ground, and everyone has that tier together. That means that you don’t want to get into a bidding war for the third player in that tier, and whoever goes first is likely to set the market. That means that whoever comes off the board second there will likely be the best value of the three as he will have the fewest people bidding on his services. If you want Chase, try to do what you can to make sure that it’s Chase, not Jefferson, who comes off second out of that group.

In a snake draft, it’s pretty straightforward: if you want Ja’Marr Chase, spend a first-rounder on him. He’s a legitimate first-round talent, meaning that someone is going to do it. If you think Chase is going to be WR1 this year, and you don’t have faith in the upside of the guys behind him, then make sure you take him, he isn’t slipping to the second round. Personally, I can’t get mad at skipping over the running backs there (Nick Chubb, Javonte Williams, and D’Andre Swift) for Chase.

Ja’Marr Chase continues to lead the league in 50+ yard touchdown receptions, dragging teams to fantasy football glory from his production.

Ja’Marr Chase fails to lead the Bengals in 50+ yard games dragging teams to fantasy football hell from his production.