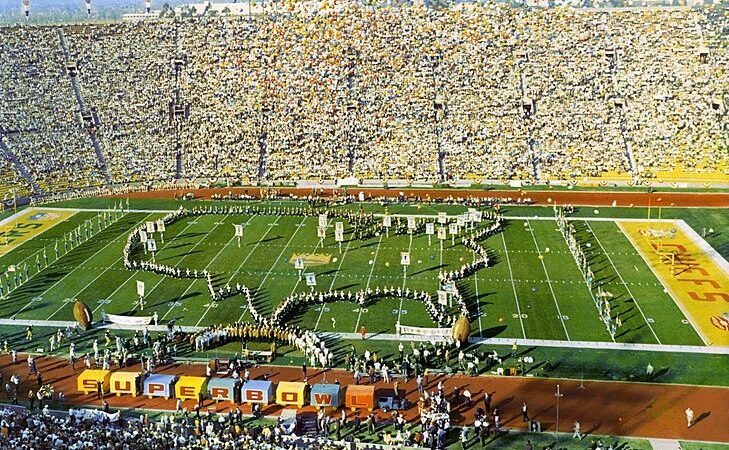 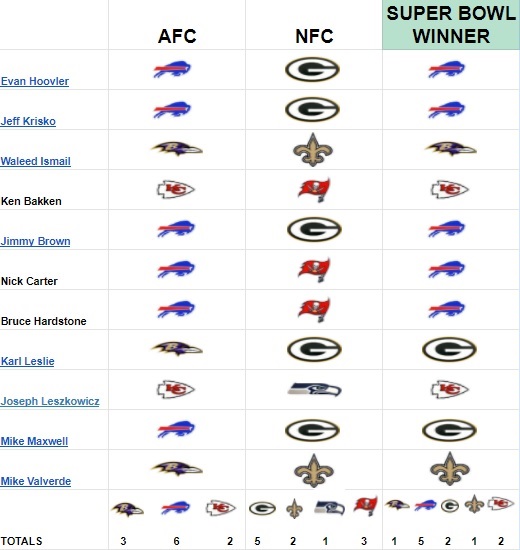 It was going to be Packers over Chiefs, but then this happened:

Think this team is staying loose?

Here's the #Bills dancing to "Can't Touch This" at practice 😂 pic.twitter.com/PIAdTS1lcf

I am now full-on #BillsMafia. Get me some Zubaz and a table to jump through.

Ravens over Saints: In a season of madness, I don’t expect anything to go truly right. The two teams that were favorites to be in the Super Bowl last year will get there a year too late. With no Vikings in the playoffs to stop them, the Saints finally have a clear path to victory. Unfortunately, because they are the Saints they will fall just short to Lamar Jackson and the Ravens. Probably in the most depressing fashion possible.

Evan Hoovler, Football Absurdity’s Guy Who Picked the Bills to Win the Super Bowl in the Preseason

Bills over Packers: We live in a world where Aaron Rodgers’ smugstache is used to sell insurance to millions of sheeple, thus preventing them from having enough money to overthrow the Illuminati (source: my blog). One man stands between us and completely being taken over by foreign operatives. The first three quarters will see Rodgers stuff the scoreboard with DOZENS of fake points, points scored by deceased players, points scored by players in the basketball game next door, etc. But God Emperor Josh Allen leads his team to 17 fourth-quarter points and stops the Super Bowl steal!

Packers over Ravens: [Karl did not provide copy so I will fill in: Karl loooooooves the Packers.]

Packers over Bills: I am all in on slamming the weakness of the NFC. That being said, we’ll get to see the beloved/hated Aaron Rodgers get back to the Super Bowl. Many people chalk the Chiefs to repeat. I know it is a new rule to forbid beating Kansas City in the postseason but it will be broken. So many people want to ‘get back to normal!’ Is there a more return to normal than Green Bay in the Super Bowl and Buffalo losing one?

Saints over Ravens: The success in the NFL playoffs hinges on defense and a running game. These two teams represent the top-tier at both of those important segments of success. If that doesn’t work out then it’s a rigged system done by Dominion software (I joke).

Chiefs over Bucs: I like the Chiefs to come out of the AFC based on the superiority of their offense. The only team that truly tested them this season was early on and it was the Raiders. I think the Ravens are a fairly one-dimensional team and would be easy to beat, the Titans would be tougher but still think Mahomes and Co. are too strong to keep up with points-wise. I think the lower bracket has an upset that sends either the Steelers or Colts to the AFC title game and neither strike me as a team to compete with the Chiefs.

Bucs come out of the NFC because LOL WFT. Then the Packers they played earlier this year and destroyed them. I think the Bucs defense is slept on quite a bit and has improved immensely and the offense in TB is much better than earlier in the year now that Brady is 16 games in. When it comes to the NFC title game, I put my money on Brady. Russ has been known to disappear as the season goes on and the Saints have the edge on the Bucs, but I think Brees is more hurt than he lets on since the injury.
I think Mahomes beats the Bucs and takes the torch from Brady.

Chiefs over Seahawks: The Chiefs’ ability to score on virtually every down and distance provides them the firepower to score against any defense. Their likely matchup against Buffalo aligns well with their strength throwing to Travis Kelce over the middle against a defense that has had struggles up the middle. The KC defense has shown up well against the pass, and with two proven pass rushers, can apply pressure when needed. The Seahawks had been terrible on defense to start the year, however as they have gotten healthy and have shown they are a lot deeper than only letting Russ cook. The Seahawks can run the ball and their WR tandem can exploit the #2 CB to play the matchups. They have the firepower to score at will as well, albeit with a more balanced offense

Bills over Packers: They are the hottest team in the second half and their only loss during that time was from a Hail Mary. 40 years of heartbreak is about to be erased in upstate NY.

Bills over Bucs: Dissatisfied with their first sweep of the Patriots, as it didn’t include Tom Brady who has haunted them for millennia, the Bills decide to take out all that frustration with him on a different team.

Bills over Bucs: My head says Chiefs but my heart says Bills. I don’t care who comes out of the NFC this year but I have a sinking feeling it’ll be the Buccs because they showed they could handle Green Bay and nobody else frightens me.

I’m gonna be courageous and say Bills over Buccs. Give Tom Brady one more crushing blow to his ego.