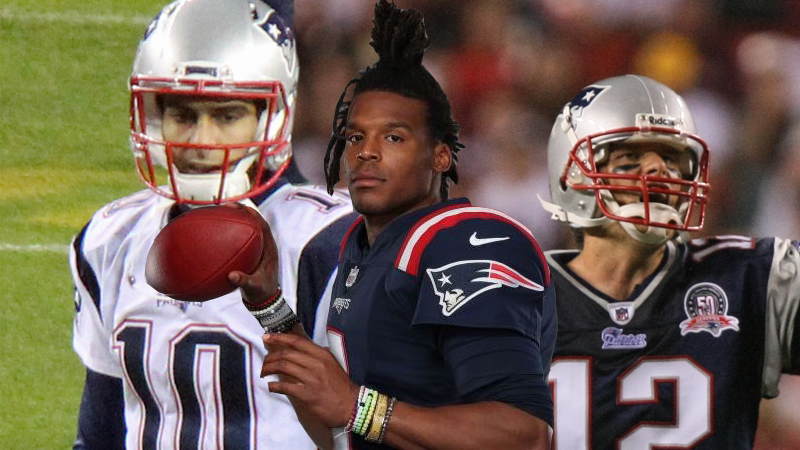 This week, we kick off our 2020 start or sit series by taking a look at three quarterbacks who have felt the subtle, soft, loving touch of Bill Belichick at one point or another. Two of these quarterbacks once shared a quarterback room, and Cam Newton replaced the legend. Now, with these three Belichick disciples starting in three different places across the league, we must decide what we should do with them, and who we should start or sit this week between Jimmy Garoppolo, Tom Brady, and Cam Newton.

Cam Newton will be the first quarterback to start week one for the Patriots not named Tom Brady since 2001, nineteen years ago! Luckily, Newton gets a soft landing in his first matchup as a Patriot as he takes on their traditional September whipping boys, the Dolphins. The Dolphins allowed the second-most fantasy points per game to quarterbacks last year, something that didn’t get appreciably worse after the Minkah Fitzpatrick trade (the Steelers got appreciably better on defense with Minkah, which shows how far bad coaching can crush a player’s impact).

The Dolphins added Kyle Van Noy, Noah Igbbinoghene, Raekwon Davis, and not much else. It’s worth noting that their post-draft depth chart and projected starters include Raekwon McMillan (who is now a Raider) and Adrian Colbert (who is now a New York Giant). While Davis and Igbinoghene should be good players, I doubt the Dolphins coaching staff has it in them to turn them into impact players in week one.

Cam Newton is a start this week if you have him in a platoon. We don’t know what his health is like at this point, but we know what Cam can be, we know what Belichick can do, and we know how bad the Dolphins should be. Expect him to run for a touchdown, as well, as the new de facto goal-line back for New England.

Another QB in a new location, Tom Brady traded in the cold New England winters for a sunnier locale down in Tampa Bay, Florida. They start out in New Orleans against the Saints. After the Saints lost a heartbreaker in the playoffs yet again, expect the Super Dome to rock on Sunday [leaving this in as the first time I forget that this is going to be an eerie season completed in ghoulish, ghastly silence]. The Saints were generally a positive matchup for opposing defenses last season, with matchups against Jacoby Brissett and the Carolina two-headed “monster” (Kyle Allen and Will Grier) hiding a team that otherwise gave up a ton of points to opposing quarterbacks. Five of the last seven teams to face them had QBs hit at least 18.5 fantasy points.

The Saints and Bucs should end up in a shoot out on Sunday, and that means that I have to recommend starting the 43-year-old Tom Brady. Freakish hands aside, Brady still plays well (in September, at least). He also boasts a set of weaponry around him that a lot of players wish they had over the course of their career: Chris Godwin, Mike Evans, O.J. Howard, Rob Gronkowski, Leonard Fournette, Ronald Jones, and LeSean McCoy. You gotta start Tom Brady just to get a piece of this potential shootout.

Start. That was easy. Jimmy G isn’t just a handsome face, he’s also a quality quarterback. Even if you don’t believe that Jimmy G is a quality fantasy football quarterback, he crushed the Cardinals last season in two matchups. Garoppolo threw for 741 yards, eight touchdowns, and two picks in his two games against Arizona last season.

Yes, the Cardinals went out and got super linebacker Isaiah Simmons, but much like the Dolphins’ new players, I expect an acclimation period. If you don’t know, Simmons was an intriguing prospect due to playing five different positions in college, but he will play linebacker in the NFL. Poor Simmons must go up against a coach who builds his game plan around specifically ruining the linebacker’s day. Simmons will go a long way to shore up a defense that tight ends routinely crushed last season, but making your NFL debut against George Kittle probably isn’t what the rookie wants.

Jimmy Garoppolo, like the other two quarterbacks, is a recommended start.

If you’re in a league where you have Cam Newton and Tom Brady, congratulations, your Patriots shirt is in the mail. But, what if you have those two, and you see Jimmy Garoppolo (51% owned) on the waiver wire? I’m going to go with the guy with a bazillion weapons (Tom Brady), then the handsome one (Jimmy Garoppolo), then the QB in a new situation who looked like burnt toast last year when we saw him for two games, and who hasn’t played healthy since 2017. That having been said, they’re all great options this week.