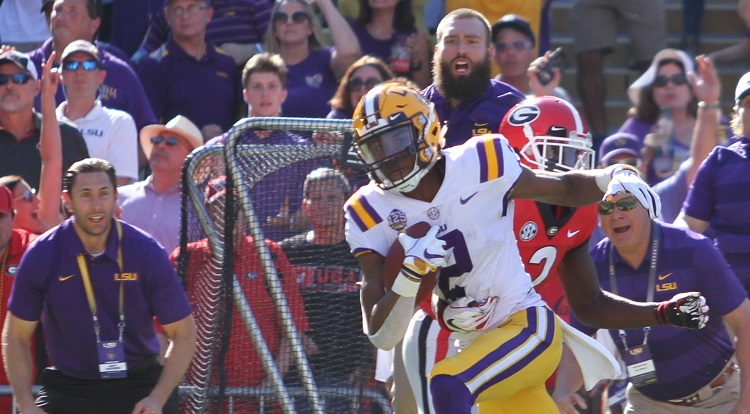 As we gear up to the start of the NFL season, Football Absurdity is going to bring you a comprehensive breakdown of every notable player that will be available in fantasy football drafts. We only look at the past three seasons for a player. This is because anyone who is looking at 2016 to figure out what to do in 2020 had better be The Angry Birds Movie producers researching to make a movie about my favorite video game: Wii Fit. Will Carson Wentz be saying “we fit” to Justin Jefferson in 2020, and will that have any fantasy relevance?

He doesn’t have any! He’s a rookie! Buzz off!

Waleed: Maybe he’s taking his time to do some extra statistical research.

Jeff: Well, he’d better have that Justin Jefferson player profile ready when he shows up. Jefferson’s 18 touchdowns and 83% catch rate in 2019 leads all rookie wide receivers, and our readers need to see it. I’ve got a clipboard full of numbers and if I don’t copy-paste them soon my eyes are going to bulge like Andy Reid in thong underwear!

[Evan slides into the room.]

Evan: Anybody order a nut?!

[Enormous audience cheer. Just ear-shattering. Evan mugs for the camera while the audience hoots and hollers. A shrieking audience member runs on-camera and is quickly dragged off by security.]

Jeff: I’ll tell you what’s nuts: Jefferson is sliding smoothly into Stefon Diggs’ role. The Vikings used the draft choice they got from the Diggs’ trade to get him, he’s tailor-picked!

Evan: The phrase is tailor-made, let’s leave the picks to Kirk Cousins.

[The audience erupts into violent laughter and cheers. Seriously, it’s as if Evan had just announced a Beatles performance or Def Comedy Jam.]

Jeff: Everything lines up: The Vikings had multiple receivers on 80% of their snaps last season, but only had three receivers on 25%. Jefferson is going to get a lot of touches.

Waleed: So, am I still in this scene or…?

Jeff: Everything lines up: The Vikings had multiple receivers on 80% of their snaps last season, but only had three receivers on 25%. Jefferson is going to get a lot of touches.

Evan: He’s going to get more touches than the guest of honor at a Vikings boat party!

Justin Jefferson Auction Value: $0
Draft Ranking: Find out for your league settings in a Beersheet!

Mom: When I’m choosing a breakfast cereal for my kids, I have to be choosey. I want yards and opportunities, but they always want the newest thing. That’s why we all love Justin Jefferson-O’s. They’ve got a wholesome quarterback and soft, chewy hands baked into each and every bite.

Plus, Jefferson’s a rookie wide receiver, which always gives my kids a buzz. At less than a 12th round draft pick and $2 at auction, he fits our budget to a T.

You grab Justin Jefferson out of the waiver wire and he becomes a decent WR3 with upside. I get therapy.

You spend some draft capital on Justin Jefferson and he becomes a decent WR3 with upside. Seriously, the opportunity for Jefferson is greater than the enormous fairy that looks like my mother who sits outside my bedroom window shrieking conspiracy theories all night.