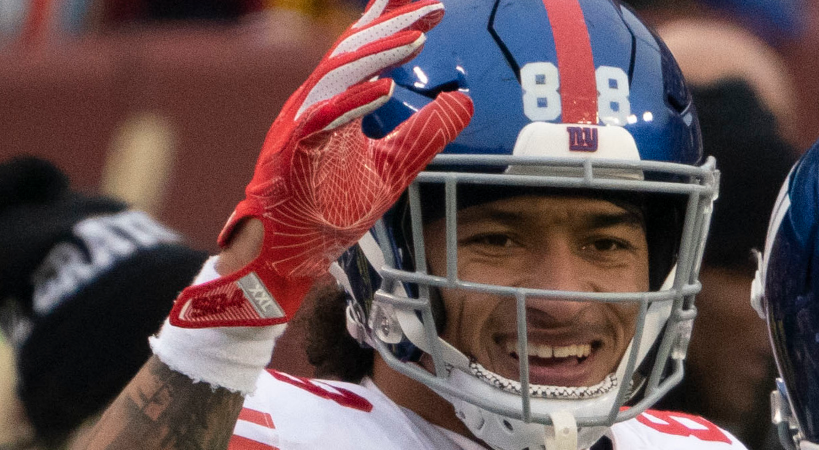 As we gear up to the start of the NFL season, Football Absurdity is going to bring you a comprehensive breakdown of every notable player that will be available in fantasy football drafts. When it comes to Evan Engram, at what point are we still paying for the promise of his rookie campaign? It’s now 2020, and Engram has two-straight lost seasons. Still, he’s going with a premium selection in fantasy football snake drafts. Is he worth the investment?

Evan Engram is one of the most-targeted tight ends in the league when he actually is able to get onto the field. Before going down with a Lisfranc injury last season, he paced out for 136 targets. Megastar Travis Kelce led the league… with 136 targets. Engram, unfortunately, turned in his lowest yards per reception and a below-average catch rate. The crazy part about all of this… Engram averaged is highest receptions per game and yards per game of his short career in 2019. But, his per-target efficiency went down across the board from his 2018 campaign (where he missed five games).

You can probably sense where this is going, but I’ll be blunt: where are the targets coming from in 2020? Sterling Shepard, Golden Tate, Darius Slayton, and Saquon Barkley all demand targets in 2020, and they can actually stay on the field long enough to merit them. While Engram is the best player outside of Saquon in that group, he’s also the most fragile. The Giants could scale down his workload because 80% of Engram for 16 games is better than 100% of Engram for four games.

There’s also the recovery from his Lisfranc injury to contend with. This thing can be tricky, with players frequently needing a second surgery before they’re back at pre-injury levels. There’s no camp yet, so all we have are reports that the Giants’ beat writers have viewed videos of him running and he appears to be doing well. Oh, okay.

This is where price and format really start to come into play with Evan Engram. For $2, I am in on Evan Engram. All-day, every day. That’s the same price you can spend on a kicker, and it’s half as much as Rob Gronkowski’s going rate right now. For that price, get Engram. Even $3, why not? You can pair him with a $1 guy later in the draft and see what happens.

In a snake draft, I could not be further away from Evan Engram. Seventy-first overall for a guy who hasn’t had a good full season in his three-year career coming off an injury. No thank you.

Evan Engram is a great lesson in knowing your format. PPR, auction… I’ll take a whack at Engram’s upside. In a snake draft, especially in a standard scoring league? Nope. In the immortal words of Dana Carvey impersonating the immortal words of President George H. W. Bush… Not gonna do it; wouldn’t be prudent at this juncture.

Evan Engram plays a whole season and ends as a top-four tight end at the season’s end.

Evan Engram gets hurt in week one and barely plays four games by the season’s end.