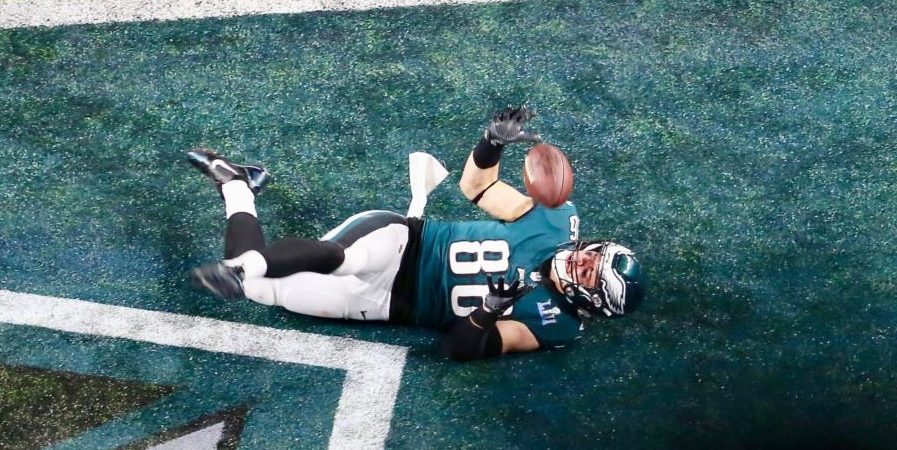 As we gear up to the start of the NFL season, Football Absurdity is going to bring you a comprehensive breakdown of every notable player that will be available in fantasy football drafts. Zach Ertz has been a top-three tight end year-in and year-out with Philadelphia. A lot of that has to do with his target volume there in the City of Brotherly Love. That’s exactly why this player profile Ertz to write. Do you see what I did there?

Zach Ertz has been one of the most-targeted tight ends in football over the last few years. The Eagles targeted wide receivers less than half the time in each of the last two years, mostly due to Zach Ertz and teammate Dallas Goedert’s immense skillsets. Last offseason, we learned that Goedert was poised to get a bigger chunk of that pie. That didn’t happen because of a nasty calf injury that hobbled Goedert for about half of the season. By the time the dust settled, all the wide receivers were dead, and Goedert and Ertz paced out for over 180 combined targets last year. That’s… a lot of targets.

This is my fear with Zach Ertz in 2020: the much-ballyhooed Dallas Goedert breakout season finally happens, and it happens at Ertz’s expense. His targets drop down to the 100 or so range, and he does not return his top-four price at TE. Much like Darren Waller, I don’t think Ertz has much of a chance of ending up outside the top-ten at TE, but I also don’t feel good about his chances of ending up top-three. There are suddenly a ton of mouths to feed in Philly, and an upstart sophomore running back. Too many questions surround Zach Ertz this year.

Zach Ertz’s upside is Zach Ertz’s asking price in drafts. He’s a top-three player who has so many question marks for 2020. Unfortunately, the best support his defenders can give is to point to the near past, before those question marks existed. I am fully out on Zach Ertz, not because I think he will not be a top-ten TE, but merely because I am not interested in investing in a player with his downside at his price. Please do not quote his target volume to me in years past, we do not get fantasy football points for 2019 production in 2020. If you do a league like that, hit me up, I would crush with the benefit of hindsight. At least, I would have made fun of DeVante Parker less going into last year.

Anyway, Zach Ertz draft strategy. If you want him, get him at a steep discount. I’m talking the hypotenuse on a 10-80-90 right triangle steep. The Dallas Goedert Question looms heavily in Philadelphia, as does the “why did they spend so much on Jalen Hurts?” question. As well as the “wait they got Jalen Reagor and Marquise Goodwin during the draft? Also, the J.J. Arcega-Whiteside redemption tour looms large in the potential 2020 target volume for Philadelphia. If I’m spending up for a tight end, I don’t want one with so many question marks. This year, Waller and Ertz both have a ton of question marks regarding their volume. If I don’t already have a TE when they show up for auction or on my draft room queue, I’m passing on these guys and dipping my toe in the water later.

Zach Ertz and Dallas Goedert are both top-ten tight ends, with Ertz finishing the year over Goedert.

Zach Ertz and Dallas Goedert are both top-ten tight ends, with Goedert finishing the year over Ertz.