As we gear up to the start of the NFL season, Football Absurdity is going to bring you a comprehensive breakdown of every notable player that will be available in fantasy football drafts. We only look at the past three seasons for a player. This is because anyone who is looking at 2016 to figure out what to do in 2020 had better be a Tyrannosaurus Rex reliving the glory days of being the best dinosaur before they were outed as one of the slowest creatures on Earth. Alshon Jemell Jeffery is an American football wide receiver for the Philadelphia Eagles of the National Football League. But can he make the move from “Wikipedia entry” to “fantasy football starter” in 2020?

Down, girl: I’m on your side, here. I want to talk about Alshon Jeffery, your expected wide receiver one. I can’t emphasize this, enough: He is one thrown battery away from a season-ending injury. Surely, if you can’t respect him as an Eagle who occasionally struggles, you can respect him as a fellow American, right? 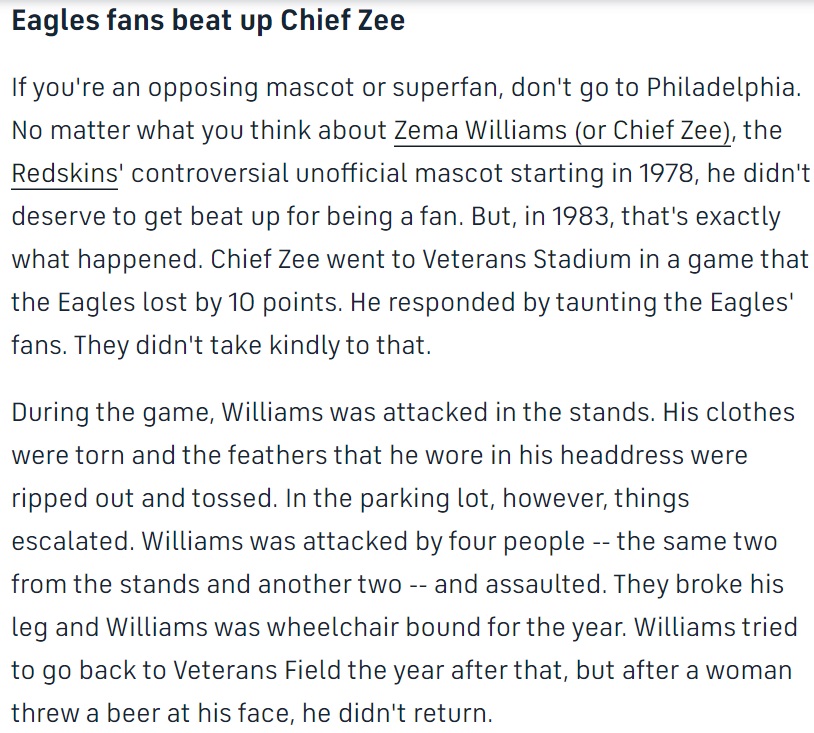 Okay that looks bad, initially, but some benefit of the doubt: Maybe Eagles fans were aggressively policing mascots that are considered racist by many. After all, it’s not like we have a universally-respected mascot that could serve as some sort of control group to see if Eagles fans were attacking racism or just attack everything.

Okay, fine. Many people will use these stories to argue that Philadelphians are all some human-hating mob, but I argue that’s not true: They don’t just hate humans, they hate everything:

Alshon Jeffery, your only hope is turning heel in order to put over rookie Jalen Reagor by looking way worse than him. Yeah, I used pro wrestling terminology there: I’m talking to Philadelphia fans.

Alshon Jeffery’s biggest bugaboo is that he cannot stay healthy, and he is unhealthy right now. Alshon is recovering from Lisfranc surgery and his availability to start the year is in doubt. Frankly, his roster spot would be in doubt if it weren’t for his cap hit.

Alshon Jeffery Auction Value: $0
Draft Ranking: Find out for your league settings in a Beersheet!

Jeffery symbolizes why I strongly prefer auction to snake drafts. In snake drafts, it’s around round 12 or 13 when I say, “I have to pick one of these guys?! Fine, give me Jeffery I guess, even though he’s finished as a top 12 WR ten times in the last three years, the exact same number of times his missed a game due to injury. Maybe I’ll get lucky and start him during the right weeks. Fine!!!”

In an auction, I don’t have to do that. In an auction, I can say, “I don’t want these Jefferys in the $1 bargain bin, I’d rather spend $2-3 and get players like Emmanuel Sanders, Jerry Jeudy, or Brandin Cooks.”

To summarize, Jeffery is a gamble in late rounds of snake drafts,  but if you grab him in an auction you could have spent a little more to do a lot better.

You grab him as a bye week fill-in and he manages to return you backend top-24 value during those weeks, maybe even grabs a couple of scores if you get lucky.

Eagles fans storm the field after Jeffery drops a pass and give him a monster wedgie. Penn University hackers leak the entire ESPN and Yahoo fantasy database, allowing the unruly Eagles mob to systematically hunt down every Alshon Jeffery fantasy owner and give them monster wedgies. The Nanny State is here, mob rule is our au pair, and there will be no appearances by the delightful Fran Drescher.