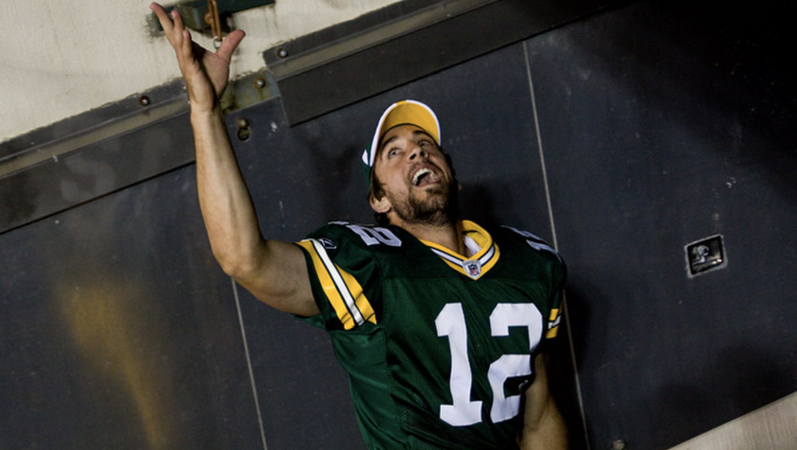 As we gear up to the start of the NFL season, Football Absurdity is going to bring you a comprehensive breakdown of every notable player that will be available in fantasy football drafts. We only look at the past three seasons for a player. The rumors of Aaron Rodgers’ demise are greatly exaggerated… or are they? He didn’t perform up to expectations last season, but can he perform up to expectations this season?

If you ask the average fantasy football player, Aaron Rodgers finished somewhere in the QB13 range. After all, his second option failed to develop yet again. He must have been truly awful last year, right? Wrong. He wasn’t great, but he still ended the season as QB9. He was usable, it just wasn’t very fun to use him since you paid a premium to have him.

Rodgers was sort of… the same passer in 2019 that he was in 2020, just a little less efficient. He lost about a fantasy point per game from his yardage contraction, but threw for an extra touchdown, so that evened out. A lot of the feelings around Aaron Rodgers stem from the fact that the Packers did nothing to get better. But how could their WR corps get any worse?

One big issue is Rodgers’ rushing. He went from 269 yards and two touchdowns in 2018 to 183 yards and one score in 2019. This comes from more rush attempts in 2019 compared to 2018, though at a significantly reduced efficiency.

The other massive issue with Rodgers’ value in 2020 is the Packers’ sudden dedication to Establishing The Run. They drafted A.J. Dillon, a bruiser, and Josiah Deguara, a blocking TE/full back. It seems as though Raheem Mostert left a permanent scar on Matt LaFleur’s soul.

Rodgers is definitely not what he once was, but he’s still perfectly serviceable. Unfortunately, you’re paying for “perfectly serviceable” with a side of “has a significant downside because the Packers seem to want to run the football a lot.” There are cheaper players than Aaron Rodgers that are definitely ones we would prefer to have at this point: Matt Ryan and Carson Wentz come to mind immediately, but there are better value propositions out there.

The only question with Aaron Rodgers is if you are investing in a rebounding value or if you are trying to catch a falling knife. The situation with Green Bay’s passing game leads me to believe it might be the second, though I’m open to being wrong. Rodgers likely bounces back from an efficiency perspective, but he probably won’t be running nearly as much and the Packers will likely rush more.

Aaron Rodgers settles the Allen Lazard versus Jake Kumerow fantasy Twitter debate by turning both of them into useful commodities. He turns back the clock and ends up back in his glory days numbers and ends as a top-three quarterback at year’s end.

The Green Bay Packers, driven mad by all the “San Francisco passed on Aaron Rodgers for Alex Smith” videos turns Rodgers into Harbaugh-era Alex Smith and they limit him to 25 or so pass attempts per game.