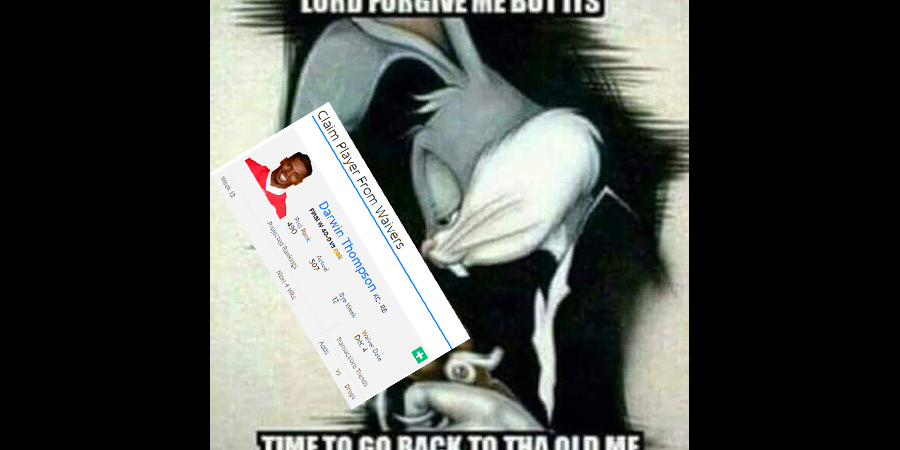 You and your team have utterly failed.  Lucky for you, there are waiver wire options to save you from yourself. If I don’t mention someone whom you think I should be talking about, just know there are many reasons why I overlooked them. Maybe they are owned in most leagues. Maybe they are so bad I don’t even consider them.  Or maybe it’s because your opinions cannot be trusted. After all, you are here looking for answers. So let us examine what our best week fourteen waiver wire players for your championship run are…

Should I Pick up Ryan Tannehill? – Owned in 30% of leagues – Last week, I warned that Ryan Tannehill’s week thirteen matchup against the Indianapolis Colts was not a favorable one. And I was right.  I also told you his next two games against Oakland (given up the fifth-most fantasy points to opposing quarterbacks) and Houston (given up the seventh-most fantasy points to opposing quarterbacks) would make Tannehill worth rostering.  If I was right about the Colts, you probably want to listen to me about the Raiders….

Should I Pick up Ryan Fitzpatrick? – Owned in 8% of leagues –  When last Ryan Fitzpatrick played the Jets, he threw for 288 yards and 3 touchdowns.  This week, Fitzpatrick will get to play a Jets team that failed to beat the Dolphins and the Bengals.  So I’ll just leave you with this little ditty.  Oh oh oh Fitzmagic!  You know.  The Jets are about to be smoked!

Should I Pick up Darwin Thompson? – Owned in 46% of leagues – It looks like the fantasy football playoffs are going to start the same way the fantasy football season did – with everyone falling in love with Darwin Thompson.  With Darrel Williams nursing a hamstring injury, Thompson is one of the few remaining options available to the Chiefs.  Truth be told, as disappointed as I was that Thompson didn’t live up to his hype, I can’t shake the feeling that if he gets the opportunity, he will be a league winner.  I’m all in on Darwin Thompson this week.

Should I Pick up Rashaad Penny? – Owned in 47% of leagues – Last week, I urged caution with Rashaad Penny.  This week, it is time to throw caution to the wind.  With over 100 all-purpose yard and two touchdowns against the Minnesota Vikings, it is clear that Pete Carroll wasn’t just paying lip service to giving Penny more opportunities.  And with Penny making the most of those opportunities, it would probably be best if he was doing it on your roster.

Should I Pick up Benny Snell? – Owned in 26% of leagues – In week thirteen, Benny Snell showed that between him and Jaylen Samuels, it would be Snell who got the majority of the carries with 16 carries for 63 yards and one touchdown.  That means that if Conner continues to miss time, Benny Snell is a high-floor guy that will have opportunities for touchdowns. Keep an eye on Conner’s status and if you can’t grab the above two guys and you know Conner won’t play, make your move on Snell.

Should I Pick up Alexander Mattison? – Owned in 32% of leagues – According to Adam Schefter, Mattison said that he will be fine to play next week. All you Dalvin Cook owners who didn’t pick up Mattison when we told you to, let your sphincter-puckering fear last night be the light that guides your way to snagging Mattison this week.

Should I Pick up James Washington? – Owned in 23% of leagues – In his last four games, James Washington is averaging 87 yards.  He also has three touchdowns over that same span.  And most importantly of all, he is among the target leaders in Pittsburgh during that span.  Basically, Washington is getting opportunities and making the most of him.  If you need help at receiver, you should definitely consider him.

Should I Pick up Anthony Miller? – Owned in 12% of leagues – I honestly don’t know if my positive feelings for Anthony Miller is my Bears fandom overriding my good judgment.  I do know that over the last three weeks, he is averaging 11 targets per game.  Coming off his first 100 yard game of the year, he appears to be on the upswing.  However, his next two match-ups against the Cowboys and the Packers leave a lot to be desired.  This is one where my heart says yes but my head says no.  And there is a very good chance my heart is a liar.

Should I Pick up Darius Slayton? – Owned in 26% of leagues – This will be the third week in a row I try telling you to pick up Darius Slayton.  This week, we are going to talk about his playoff schedule. Over the next two weeks, he will be playing the Philadelphia Eagles and the Miami Dolphins.  Or as I like to put it in fantasy terms, teams that have given up the sixth and fifth-most fantasy points to opposing wide receivers.  Coupled with the fact that over his last three games, he is averaging ten targets a game, Darius Slayton has the potential to be a monster in the fantasy playoffs.

Should I Pick up Kyle Rudolph? – Owned in 50% of leagues – Guys, remember last week when I told you that Kyle Rudolph has been a top-five tight end over the past month?  And remember when he continued to roll in week thirteen, but somehow was still available in 50% of leagues? I swear to God if I have to write about him again next week…..

Should I Pick up Mike Gesicki? – Owned in 25% of leagues – Mike Gesicki has been improving steadily over the last month of the season.  He is getting tons of targets and each week gets better and better.  This week, Gesicki is playing a New York Jets team that allowed him to get six catches for 95 yards.  I’m just saying, this guy might be pretty good….for a tight end.