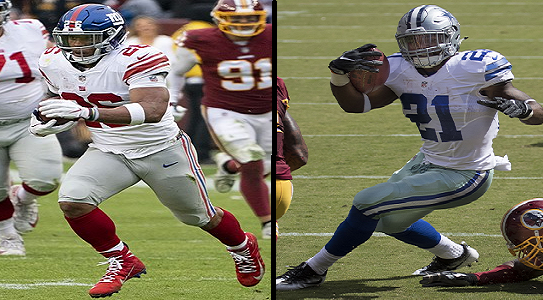 Mae West: Sex symbol, legendary wit, and perhaps the best person to answer the question “Should I draft Ezekiel Elliott or Saquon Barkley #1?” even though she died forty years ago. No, seriously, we dug up Mae West…

… quotes and realized that her quips are extremely relevant to today’s burning fantasy football questions, such as:

Should I draft Ezekiel Elliott or Saquon Barkley #1?

So, clearly, West thinks Elliott having more seasons of success is not as important as Barkley having the best recent season. Barkley it is.

Who will become the #2 receiver in Pittsburgh-
James Washington or Donte Moncrief?

Mae West: When choosing between two evils, I always like to try the one I’ve never tried before

Ah, so West is definitively stating we should go with unproven rookie Diontae Johnson rather than either veteran. An insightful execution of fantasy football thinking outside the box.

Can Baker Mayfield Elevate the Browns to Fantasy Stardom?

Mae West: Ladies who play with fire must remember that smoke gets in their eyes.

Ah, so the Browns history of burning fantasy owners is having a reverse effect: Now that they’re good, we’re overestimating them due to infatuation. Temper your expectations for the Browns’ offense.

Can Lamar Jackson Be a Dominant Fantasy Football QB with His Rushing Ability?
Will Mark Ingram Receive a Three-Down Workload?

Mae West: It’s not the men in your life that matters, it’s the life in your men.

One quote to answer a pair of questions about Baltimore’s fantasy prospects. The youthful Jackson will help fantasy teams, but the nine-year-veteran Ingram will not.

Are Tom Brady’s Days as a Great (Fantasy Football) QB Over?

Mae West: All discarded lovers should be given a second chance, but with somebody else.

Letting another owner overpay for last year’s QB14 is a mandatory strategy.

For more articles about dead people, check out An Obituary for My Father: Fantasy Football Advice about Players on New Teams