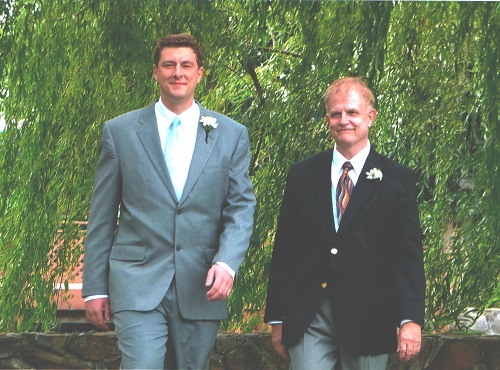 I’m sketching out an outline for this article with my right hand. My left holds the hand that once belonged to my father, Dr. Jonathan Hart, but now is attached merely to a body.

I know what you’re all thinking after reading that: “Evan, isn’t it early for a fantasy football advice article?”

But it has been one of the most exciting weeks for football, perhaps the busiest off-season week of all time. Top fantasy players changed teams more than USC’s rowing team accepted scholarships.

My father was a nut for fantasy football, and devoured advice articles like Eddie Lacy devoured “China food.”

As a tribute, I am going to examine the key points to his life and how his 72 years of experience can help your fantasy football team.

My father was born in Mansfield, Ohio, in 1946. From an early age, my father pursued his true calling of “doing anything he could to get away from Mansfield, Ohio.” However, coming from modest means, transportation to the big cities was difficult to obtain. So he devoted himself to his studies. He excelled so much that he was offered a chance at an exclusive “Evans scholarship” which included full-tuition and board to study chemistry at Ohio State University. However, there was one hitch: He needed to make the 70-mile trip to Columbus for an interview. He had no access to a car and rural Ohio’s only form of public transportation had to be occasionally milked.

My dad concocted a plan: He buddied up with the only teenager he knew who had a car and went out for hamburgers. There, he mentioned how much better the hamburgers were at White Castle, a chain restaurant with the closest location in Columbus. He went on and on about how tasty, yet affordable the White Castle sliders and fries were all week long, and finally convinced his friend to go in on a road trip to White Castle. Once in Columbus, my dad went off to his interview leaving a severely disappointed friend in a sticky White Castle booth with a mouthful of grease.

No matter which NFL team’s media market you live near, local sports reporters will make every move sound great. Your team paid zillions for an over-the-hill wide receiver? Genius! Your team traded away a top-tier player for a song? Masterful! The local hype is so great that the Cleveland Browns, 0-16 two years ago, have moved into the top five teams receiving bets to win the next Super Bowl. That’s like betting John McCain will win the next presidential election.

Don’t use local reporters when trying to judge the fantasy value of your team’s offseason moves.

After enrolling at Ohio State, my dad discovered that studying chemistry in the tech giant, three-horse town that was 1964 Columbus wasn’t fast enough for him. He joined the army. He excelled there even more than he did at school, rising to the rank of army captain by the age of 23. However, he soon became apprehensive of being sent to the increasingly deadly jungles of Vietnam. So he devised a plan: He would figure out who assigned troops to fight in the War, get that job, then conveniently never draw his own number.

This worked well for a while until his superiors got wind of it. Desperate for a solid captain to strategically lead troops right down the gullet of the Viet Cong, they insisted he test for the war. The test involved handling several large caliber weapons: A rifle… a bazooka… his first test was to lob a grenade over a wall at a fixed target.

Jonathan Hart wound up his throwing arm… and chucked that grenade directly into the wall as hard as he could. It bounced back and rolled up to his feet. The officer supervising the drill dove, knocking Jonathan away from the blast. Both got up, unhurt, and while dusting themselves off, Jonathan asked, “so am I gonna do the bazooka next?”

My dad did not get sent to Vietnam.

Tip 2: Great players being sent to disastrous situations does not mean they will perform better.

Antonio Brown and Le’Veon Bell weren’t happy with Pittsburgh, and demanded to be sent to a team that would vie for a title. Instead, they were sent to Oakland and the New York Jets, the NFL equivalent of a trench filled with Agent Orange. Don’t draft them. Someone is going to believe they will have the opportunity, now that they aren’t surrounded by players that take touches away, and will draft these players much higher than they will perform. Let them, and laugh.

While in Germany, Jonathan met my mother and they moved back to the states and took jobs outside of the military. One day, frustrated by the lack of opportunity to excel, my dad declared to himself that he was going to do the next impossible thing he heard. Later that day, at a meeting of friends, my dad overheard a few of them discussing the notion of whether or not one could walk across the entire United States on foot. My dad blurted out, “that’s impossible!”

In the early 1980s, my dad set out from San Francisco and walked to New York City.

Tip 3: Don’t use past performances as a surefire indicator that something won’t happen.

In 2017, the Chiefs hadn’t won a single game with a quarterback they drafted for 30 years. Did that mean people should stay away from Patrick Mahomes? Mahomes did the seemingly impossible by not only winning games for the Chiefs, but putting up one of the best fantasy seasons by a QB, ever. Those who took a late flier on the athletic freak were rewarded with insane fantasy profits. The concept of “any given Sunday” applies to fantasy, as well.

Jonathan eventually developed a deep interest in spirituality and psychology. He began pursuing a PhD in transpersonal psychology and changed his name to Agamemnon. Just Agamemnon. He graduated from the Institute of Transpersonal Psychology in the late 1980s and began his own spiritually-focused psychology practice. This proved extremely lucrative and he stuck with this career until the final month of his life.

Tip 4: A Promising Quarterback Can Have a Huge Season Despite Several Down Years

Check out the list of top quarterbacks for weeks 1-16 of 2018, the results are surprising.

Matt Ryan finished #3 the season after a #15 finish. Aaron Rodgers came back from an season-imploding 2017 injury to finish #4. Andrew Luck recovered from an injury that lasted almost two years to disprove the doubters with a top-5 finish. That’s over half of the top 5 quarterbacks coming from extremely tough situations to lead fantasy teams to success. If a quarterback has shown elite skill in the past, consider picking them up after a poor or injured year.

One of Jonathan’s favorite hobbies was playing tournaments of the card game duplicate bridge. I had the honor of playing with him on several championship teams. He eventually ascended to the rank of bronze life master, the card-slinging equivalent of a second-degree black belt. Despite his skill, he was known for his affable demeanor: Once, when we were in a heated semifinal matchup, a team we weren’t even playing called the referee on us and our opponents for laughing too loudly.

I first introduced my dad to fantasy football in 2002. He was instantly hooked. The same skills that had made him an expert in duplicate bridge transferred over to pen-and-paper gridiron: Reading players, juggling odds, making bold plays. He soon became one of the best players I have ever known. One time a friend of ours had to drop out, mid-season, leaving Jonathan to manage his 7-0 team. He immediately went all-in picking and trading for players that had soft matchups in the fantasy playoffs. He lost the next six games in a row. Barely sneaking into the fantasy playoffs, he then proceeded to destroy all three of his post-season opponents to take the title.

Tip 5: Great Coaches Can Apply Their Skillset to Multiple Teams

Frank Reich took his offensive coordinator skills to the Colts in 2018, and they finished in the top 5 in terms of points scored. Recently, Tevin Coleman signed with the San Francisco 49ers. This reunites him with the coach who drafted him, fantasy stud-maker Kyle Shanahan. Coleman might be worth a mid-to-late round flier on the grounds that his extreme athletic ability could create fantasy points, now that he’s back in the hands of a coach who can use him. Upgrade teams getting expert coaches from other squads, and downgrade great teams that lost a crucial play-caller in the off-season.

Like all fathers and sons, my dad and I had our disagreements. But we were always motivated to make up with each other when August rolled around and we needed each other for fantasy advice. Last Summer, he and I co-wrote an article which gained the most views in the history of this website.

Though he had a life defined by thriving outside the norm, the end years of Jonathan Hart were the pinnacle of responsibility. He retired his practice to follow his young, extremely active grandsons across the country. At times, he cared for them 40+ hours per week with boundless energy beyond that of a normal man who has seen eight different decades. Even in death, perhaps the ultimate derailer of an otherwise unflappable attitude, he rose to the challenge admirably. He planned for the end of his life in a way that was not only comfortable for him, but for those who loved him. Everyone should be so fortunate to have their loved ones come to an end as bravely and consistently as he faced down death, yet only a handful of people ever have been so lucky. He donated his eyes, which are currently being evaluated for transplant so that two blind people can gain sight.

Jonathan Hart is survived by his son, twin 6-year-old grandsons, and a legacy that was truly one in a billion. He’ll be playing on a new team next season and, while I don’t know where or what it is, I do know one thing for certain…

Special thanks to Jeff Krisko and Waleed Ismail for helping me punch up this article when I wasn’t in the most humorous mood.

For more articles where Evan takes a basic fantasy football writing assignment and makes it SUPER WEIRD, consider these:

Which NFL Team Is Your Personality Type? Take this Short Quiz to Find out

Thinking of Playing Fantasy Football? Find out if It’s Right for You with This Choose-Your-Own-Adventure

9 Comments on “An Obituary for My Father: Fantasy Football Advice about Players on New Teams”