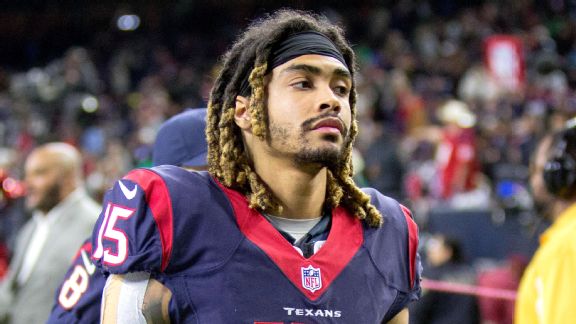 Every week at Football Absurdity, we like to help you with your start or sit decisions. However, we have found that highlighting just one player at the fringe helps exactly one player in every league. In the interest of spreading the wealth, we have changed the format. We will now provide you start or sit advice and details on three players you should start and three you should sit on the periphery of usefulness. We are here for the people, and we only want to help you! Without further ado, the WR sits this week: Should you start or sit Will Fuller, Larry Fitzgerald, or Demaryius Thomas?

Will Fuller at Jacksonville
Once upon a time, Will Fuller & Deshaun Watson were small sample size personified, averaging a touchdown a game together. That was a Watson chest injury and Fuller hamstring injury ago. The truth is that the one touchdown a game quietly hid that he was touchdown-or-bust for most of those games. He has just eleven targets over the last three games, turning that into just 32 yards per game, with one score in those games. This week he gets a Jacksonville squad fresh off of getting smacked around by Dak and the Cowboys. Even with that weird outburst by a bad offense against a great defense, only Cole Beasley had a truly good game. The Jags allow the fewest fantasy points per game to wide receivers, and only the superpowered Chiefs offense managed to get two wide receivers into double-digit points in half-PPR against them. If you aren’t desperate, and you can actually choose to start or sit Fuller, he’s a sit for me this week.

Demaryius Thomas at Arizona
Demaryius Thomas and the next guy on this list were fantasy football royalty. They spent over a half-decade as consistent PPR producers. Unfortunately, the bottom fell out this year. Demaryius Thomas is not capital-D-capital-T Demaryius Thomas. Well, he kinda is, because that’s how names work. But you know what I mean. Metaphorically. He looks enticing from the top-view angle, averaging 81 and a score over each of the last two games. However, the man who hasn’t had long speed in his game managed to turn four catches a game into a 20+ yard per catch return. That’s well outside his normal numbers. He’s also the wideout most likely to get erased by Patrick Peterson this weekend. Oh, and his QB is still Case Keenum, which is enough to make you wonder if you should start or sit Demayrius Thomas. This week, it’s enough for me to sit him.

Larry Fitzgerald versus Denver
The man formerly known as Larry Legend is currently Larry Lost Without Catches. He and Josh Rosen haven’t been able to sync up so far in three games, with the connection producing just ten catches for 102 yards over those three games. The offense has simply shifted to the future: Christian Kirk and David Johnson lead the way, with Fitz getting the scraps. Even worse? Larry Fitz plays the vast majority of his snaps in the slot these days, which means he is on a collision course with being Harrised, which is slang for being erased from the face of the earth by the best slot corner alive. Legends never die, they just fade into questioning if you should start or sit them. Sorry, Fitz, you’re a sit this week.