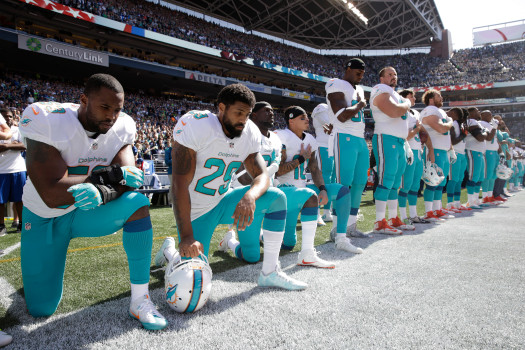 Welcome to the madhouse: Our increasingly popular look at funny comments from NFL fans.

The first of our funny comments comes from a Yahoo article about the cutting of longtime Cowboy booter Dan Bailey. This poster chimes in with a take on Jerry Jones that is as insightful as it is factually accurate:

Jones bought the Cowboys 29 years ago and has won three Super Bowls. Also, while I’m not usually a fan of his, “using” a kicker and then “tossing them out” when their field goal percentage descends from 90% down to 75% due to a lingering injury is just good math, Cody, the kind you don’t seem to use.

After trading a third-round draft pick for him, the Raiders cut Martavis Bryant. This kicked off an insane batch of several hundred comments, also on a Yahoo article (ESPN, NFL.com, and CBS have all disabled comments, so the crazy, funny comments have all migrated to this large site.)

First, everyone in the comments makes the collective assumption that he was kicked out for pot. This led to several people bragging about how much pot they smoke:

Here’s a tip: Smoking pounds of pot actually does not make you an expert as to the logistics of collective bargaining agreements. Unexpected, I know!

That article keeps on giving when someone makes the “gateway drug” argument, another poster refutes it with a solid point but then backs it up with the worst example ever:

Well, sure that’s true “Big,” but it’s only because someone left a line on top of the urinal at my favorite bar.

Just like with the cocaine guy: Great point, horrible example. Someone else decides this is a great place to advocate a boycott of… well, everything… because of… well, some issue they never fully clarify:

What does “overpaid beotchez crying about their entitlement” have to do with Martavis Bryant getting cut? I don’t know, but “Homer” does have a great all-purpose solution. Hey, are you tired of products being tested on animals? Just stop buying all products and the problem will go away.

Then, just when I thought I was at maximum bewilderment over these funny comments from NFL fans, this poster comes in and levels me with the knockout blow of confusion:

No, this wasn’t in reference to any other comment or part of the article.

Even more confusing than pot-smoking Obama Zombies (Zoombamas?) Is this comment from a Bleacher Report piece about the epic Khalil Mack trade to the Bears:

I think my favorite part of this comment is the one-word sentence, “Mack.” Succinctly put… almost too succinctly.

Finally, you know those guys who are funny, but feel the need to repeat their punch lines over and over until they get a laugh? Also, you know those other guys who aren’t funny, and get so happy when they actually make a simple joke? All those guys got in a pile and had a baby, and it’s the following poster. All of the following are from the same USA Today article about NFL predictions:

YES WE GET IT! YOU INCORPORATED A SINGLE WORD FROM THE ARTICLE TITLE. You also don’t watch NFL, yet obsessively haunt the comments sections of NFL articles. I will kneel for you in protest of America’s lack of good mental health care.

For more funny comments from NFL fans, look at this stuff:

2 Comments on “Hot Takes from Crazy People: Just Boycott All Pro Sports and the Problem Will Go Away”