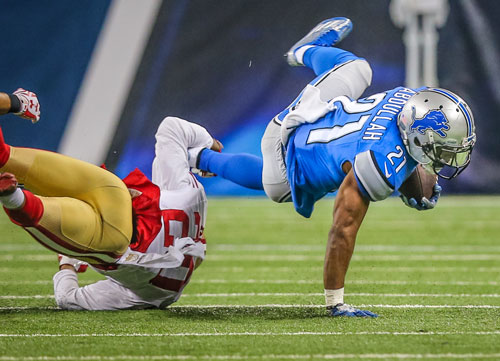 This week my co-worker, Jeff Krisko, suggested that starting Adrian Peterson is the smart fantasy football play.  In our week nine running back sit or start counterpoint, I’m going to steer you away from Adrian Peterson for a very simple reason — it is no longer 2012.  In week nine of the year 2017, you should start Ameer Abdullah.

Jeff wants you to start Adrian Peterson this week.  I also suspect Jeff wants you to watch the series finale of Breaking Bad and get in on that Moneyball action.  Personally, I like to live in the now.  And right now, the Arizona Cardinals are a mess.

While the San Francisco 49ers have given up the most fantasy points to running backs in standard scoring leagues, there is a good chance that Rueben Foster will be back in uniform this week, which will help their run defense tremendously.  I suspect running on them will not be as easy as it has been in past weeks.  Even more importantly, the Cardinals will be playing Drew Stanton at quarterback.  That means the 49ers are going to be keying in on stopping the run, because who is really scared of Drew Stanton?

So if you want to bedazzle your fantasy football starting lineup with Adrian Peterson, go right ahead.  Just remember that running backs depreciate in value over time.  If you want to live in the moment, you should start Ameer Abdullah.

This week, Ameer Abdullah gets to play a decimated Green Bay Packers team.  To date, the Packers defense has given up the 9th most fantasy points to running backs in standard scoring leagues.  More importantly, the loss of Aaron Rodgers has had a serious impact on how their offense runs.  In week seven, against the New Orleans Saints, The Packers were dominated in time of possession by a two to one ratio.  I expect that trend to continue and the Packers defense to stay on the field a lot.  Typically, this leads to be running game performances in the fourth quarter.  Abdullah might start off slow this week, but he will be feasting before the game is over.

I do understand the appeal of starting Adrian Peterson.  I tight-rolled my jeans until I was 24 years old.  But sometimes, you just have to let the past stay in the past.  This week, Adrian Peterson will be staying on my bench.  The matchup against the Green Bay Packers is too good to pass up.  That is why I feel I have to start Ameer Abdullah.