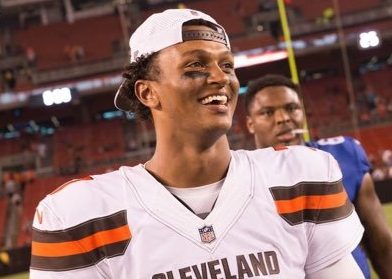 Josh McCown  – Owned in 24% of leagues – Last week, Josh McCown was only owned in 12% of leagues.  He has doubled that number this week.  By next week, he might be gone.  This past game, he threw for 257 yards, 2 touchdowns and 0 interceptions.  This is also the 4th multi-touchdown game that McCown has had in a row.  If you don’t have a quarterback, there are a lot of worse options out there, but none that are better.  So you might as well bring McCown onto your team so you can make a nice little push for your loser bracket championship run.

DeShone Kizer – Owned in 3% of leagues – It has come to this.  I am recommending DeShone Kizer in the waiver wire quarterback article.  Okay, recommending is too strong a word.  I am mentioning him in the waiver wire quarterback article.  This week, Kizer threw for 179 yards, 0 touchdowns and 0 interceptions.  He did rush for 18 yards and 1 touchdown though.  The only thing that can be said about Kizer’s performance in week eight is that this is the first time this season he didn’t just poop all over himself while in a real live game.  The Cleveland Browns still lost by 17 points.

Bonus: Aaron Rodgers – Owned in 44% of leagues – I say just look at what I said about the man last week.

Double Bonus: Jimmy Garoppolo — Owned in 3% of leagues — With the news that Jimmy Garoppolo has been traded to the San Francisco 49ers, the question is how will this impact his fantasy value this season.  It won’t.  Garoppolo will be learning a new offense halfway through the season on one of the worst teams in football.  However, if you are in dynasty leagues or keeper leagues, you definitely should be looking at investing in him.  Next season, he will be the hand-picked quarterback of the coach who made Matt Ryan an MVP candidate.  Picking him up to use a late round keeper pick on him is definitely a worthwhile investment.