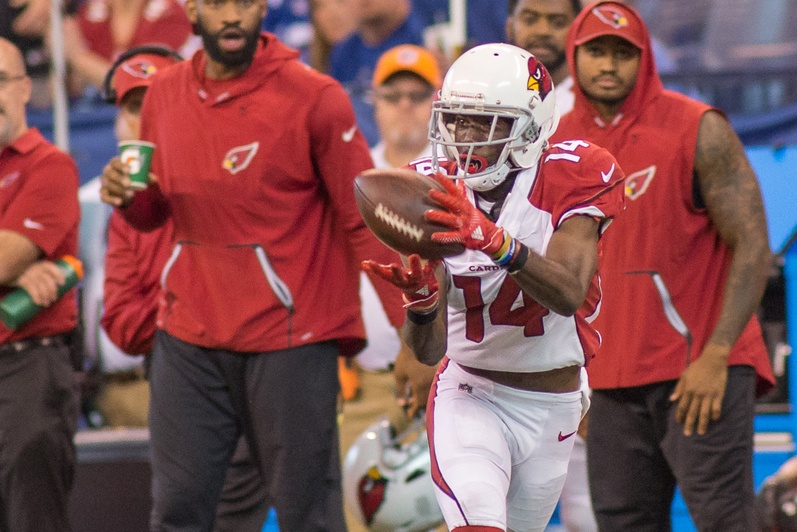 Last year he won me money in daily fantasy football, this summer I wrote about him as a fantasy football sleeper, last week he was one of my streamers. Of course, I’m recommending J.J. Nelson now that he’s done a full-on breakout so far in 2017. Before talking about his matchup this week, I’d like to recap the J.J. Nelson I fell in love with in the middle of June headed into this season.

Nelson’s spent his career playing fourth fiddle to Larry Fitzgerald, John Brown and Michael Floyd. Now two of those three are unavailable; Brown (sickle cell anemia) and Floyd (kombucha) won’t be on the field Sunday, opening up plenty of opportunity for Nelson. Nelson has produced whenever the Cardinals gave him production. In all the games where Nelson received at least five targets, he played on a 1,323 yard & eleven touchdown pace.Fantasy Football: Start or Sit J.J. Nelson in Week Three?

Let’s fast forward to the most recent games where the Cardinals give Nelson an opportunity to produce. He’s gotten at least five targets in his last five games. In that timeframe, he has 408 yards and four touchdowns. His lowest fantasy point total was 75 yards without a score in week seventeen last year. Nelson has been on an absolute tear going back to last season, and opportunity cleared out in front of him.

This week the Cardinals take on the Dallas Cowboys, who crushed the Giants and then received a severe crushing from Trevor Siemian. Given the Giants’ are in a complete death spiral and without their best player in week one, I am going to say the game against the Broncos was more real than the game against the Giants. Lots of factors went into the final lines, but Demaryius Thomas and Emmanuel Sanders combined for over 25 points.

The breakout campaign for J.J. Nelson has been a long-time coming, and now it’s here. The players in front of Nelson parted like the Red Sea. This gives Nelson the opportunity to produce this week. Carson Palmer could fall apart and Nelson could have a floor of three points or so, but if you need a home run play, there are few more viable this week than Nelson. He’s a start for me this week wherever you may have him unless you have two top-twenty options (in good matchups) available to you.