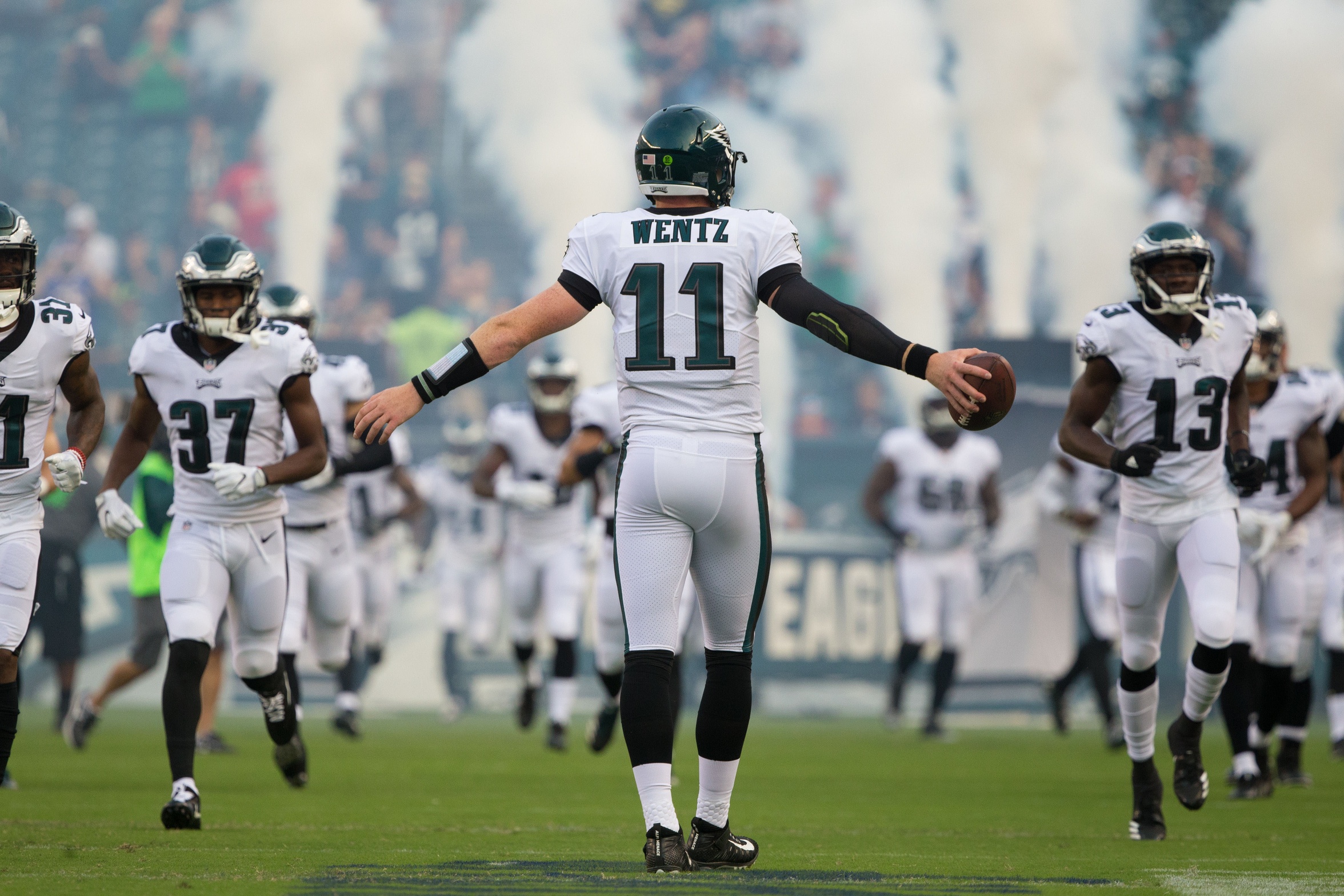 Coming into this fantasy football season, there was a class of quarterbacks who were set to be back-end starters who you could mix-and-match two of them to cobble together a semblance of a top-five fantasy quarterback. Oddly enough, Carson Wentz sat just below that level. Wentz was going as QB17 on average, just four picks before the #8 DST off the board. He was solely a late-round flier. Now, he sits third at quarterback by fantasy points (behind Trevor Siemian and Alex Smith, just like we all thought). This week he takes on a Giants defense that allows just the thirteenth-most points against the position this year; is he worth slotting into your fantasy football lineups this week?

While Wentz sits as the #3 quarterback, he got extremely lucky on two different plays this year that contributed massively to his fantasy football production. First, in week one, he evaded a Fantasy Football: Start or Sit Carson Wentz Week Three?certain sack and threw a bomb to Nelson Agholor for a touchdown:

Second, last week, he completed what is most likely the luckiest pass that will occur all season.
(gif from SBNation)

Woo-ee. Those two plays account for 101 yards and a score in Wentz’s final stat-line. That means those two plays account for over 21% of his fantasy football production so far this season. That’s a good thing and a bad thing. It’s good because it shows his incredible pocket mobility and that he keeps his eyes downfield. It’s bad because that sort of funslinging mentality leaves him prone to blow-ups and bad because 21% of his fantasy points this season have been ridiculously lucky.

On that second point, let’s do a thought experiment: what if neither play had connected? He would lose 12.04 fantasy points on the season (less 101 yards, one touchdown, plus an interception). He would be down to 33.66 fantasy points total. That puts him at QB12, ahead of guys like Marcus Mariota (32.84), Matt Ryan (32.82), Cam Newton (25.96), Russell Wilson (23.64) and Colin Kaepernick (0.00). Don’t let the detractors of those plays distract you, even if they went sour, his ability and willingness are both great things for potential fantasy football production.

This week Wentz takes on an in-division rival as the Giants, fresh off a Monday Night Football embarrassment, head to Philly. They have been a middling matchup this season on their face, but they have actually been a bit of a mess. Their strength is the defensive line, and they exist among the top-half of fantasy points allowed taking on two bad offensive lines. They get the Philly offensive line that might be top-five in the NFL. The QBs also took their foot off the gas, as the Giants combined to lose 43-13. The Eagles have no run game to speak of, unlike Dallas and unlike the Lions with a healthy Ameer Abdullah. This means taking the foot off the gas still means plays coming from Wentz.

Overall, Wentz has been extremely impressive this season. Who wouldn’t be, given that his second-best receiver last season (Nelson Agholor) now sits behind Alshon Jeffery, Torrey Smith and (finally for his fantasy football believers) Zach Ertz. Detractors will point to how many of his points came in two plays, but he’s still a QB1 without them. Start him this week against the Giants. They’re quickly swirling the drain and are unlikely to put up a fight. Start Wentz with confidence this week.