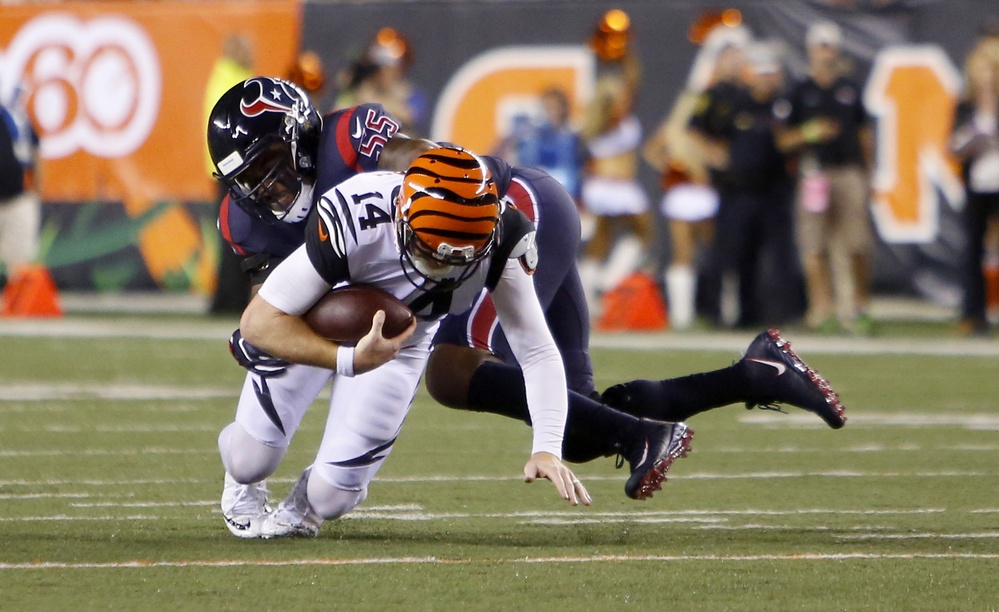 Look can you j—

Can I go now? Okay. Now that that’s out of the way, you now understand the experience of the beginning of the Bengals-Texans game, which started in a flurry of flags and one of the worst first quarters you will ever see. It mercifully ended after neither team did anything of note and technically the Texans did more of nothing of note to score more points. Like most Thursday Night Football games, this one was garbage. This wasn’t even one of the TNF’s that was respectful enough to make it hilarious. Instead, it was just regular old boring. It was the Cincinnati Bengals of a game. Nothing exciting about it, ultimately it feels like something isn’t quite right, and it doesn’t come close to living up to expectations. Perfectly serviceable but you’d rather be doing something else. Despite the boring nature of the game, there were still some moments of insanity and hilarity you might have missed if you didn’t watch the game. We’ll run those down below.

5. HAPPY BIRTHDAY DESHAUN WATSON
Today was Deshaun Watson’s first NFL start, on his 22nd birthday, and Geno Atkins knew just what to get him

4. ANDY DALTON AND THE TERRIBLE, NO GOOD, VERY BAD BACK-TO-BACK THROWS
Andy Dalton tossed a football out of bounds on a run-pass option. He took the run option and decided a better decision was to throw it out of bounds. The next play he overthrew a wide open Brandon LaFell by about five yards.

Then literally three tweets in my timeline in a row, telling the whole story.

Don't get me wrong, I love Dalton. Unless he sucks. I hate Dalton. pic.twitter.com/gHY1SBczDd

3. TYLER EIFERT’S MADDEN AWARENESS RATING IS NOW 2
There was a play in the end zone that ultimately cost the Bengals the game. Tyler Eifert stood all by himself in the end zone, but decided he needed a bit more space to himself and ended up out of bounds for no reason. He quickly jumped back in-bounds as Andy Dalton tossed him a pass. Touchdown! Touchdown nobody, because you can’t go out of bounds. Now that’s a Brain Eifert.

Throw it down, big man! pic.twitter.com/nlztDJSeLn

That tackle ended the Bengals’ bid to not be the first time since 1939 to start a season without scoring a single touchdown at home in back-to-back games to start the season. Their last touchdown in Cincy was scored by Rex Burkhead in week seventeen last year.