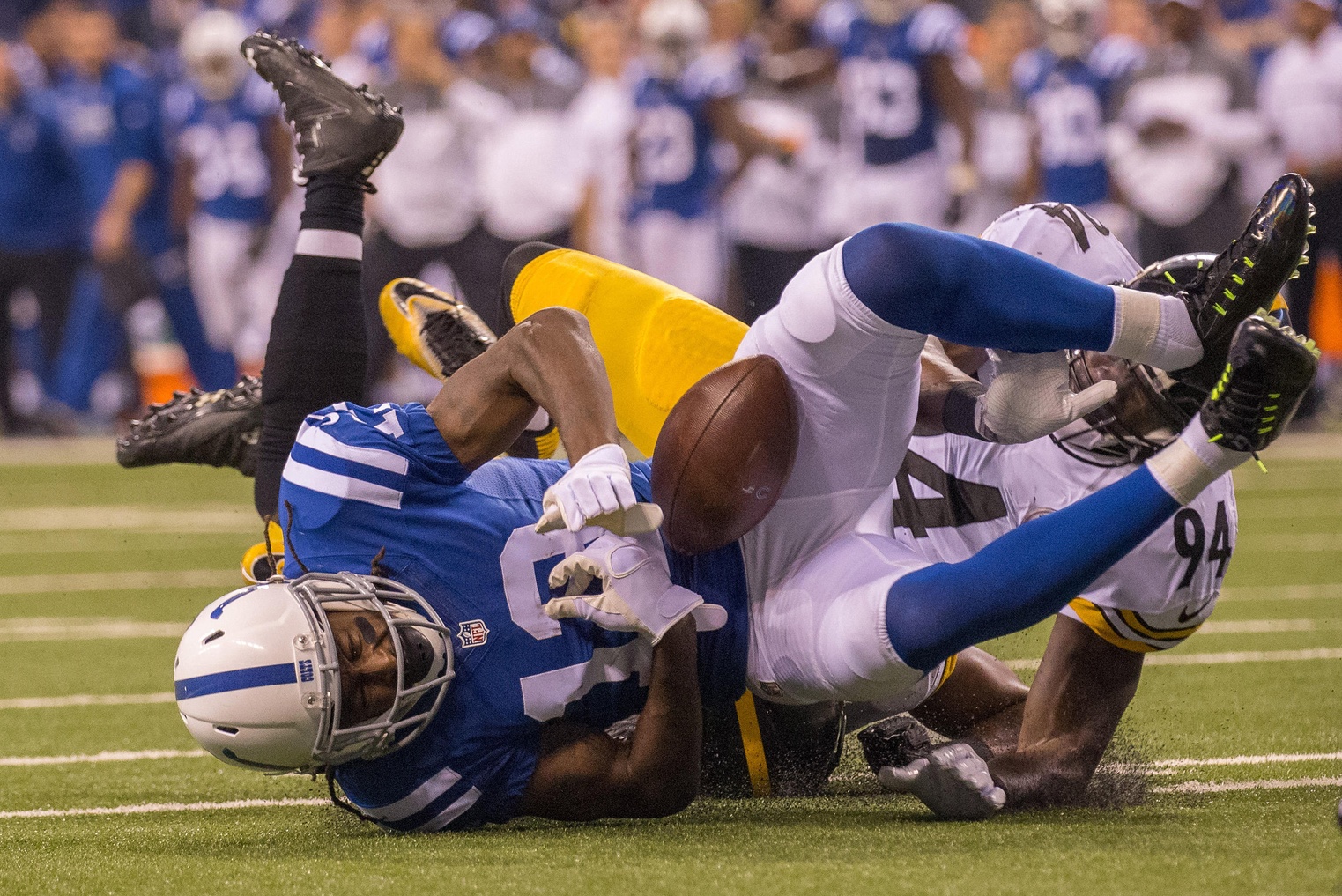 It’s a bit early in the season to start second-guessing the decisions you made in your draft, and it’s also a bit early in the season to abandon the “don’t sit your studs” mantra. Either way, when it comes to T.Y. Hilton, it’s time to start questioning everything surrounding him until Andrew Luck gets back. All you need to know about whether you should start or sit Hilton this week is in the seven targets Scott Tolzien gave him last week.

The first pass to T.Y. Hilton was one of the most horrible, pathetic throws I have ever seen in my entire life. Tolzien’s complete lack of arm strength is on full display as the ball seemingly stops mid-air and nose dives like a wiffle ball in a strong breeze.

The second pass to Hilton was on point, mostly because it spent literally less than half a basketball court in the air. Still, Tolzien managed to throw this behind an open Hilton. Hilton, sensing the urgency in the fact that his ostensibly professional quarterback can’t even throw a ball forty feet accurately does too much. His third effort on the play results in a fumble. If Tolzien knew how to lead a WR, this would have been at least a fifteen yard gain.

Tolzien’s third offering to Hilton somewhat resembled a real life starting NFL quarterback. There’s nothing pithy to say about a 16-yard dig-turned-curl by Tolzien underthrowing it. Oh, I guess there is something pithy to be said about it.

Mark it down. 5:12 in the second quarter. Tolzien, under pressure, threw a ball falling away to Hilton for 32 yards. Nice play, Scott! Please note Tolzien’s fourth pass to Hilton was his last completion to the Colts’ best player.

The Tolzien-Hilton pass #5 was nobody’s fault. Hilton was held. It was Scott Tolzien’s best play of the day because it was certifiably Not His Fault. He immediately followed it up by having to call a timeout to prevent a delay of game on 4th and 7 with four seconds left on the clock because the Colts farted around too long.

The next time Scott Tolzien targeted Hilton, he was actually in the front of the end zone! Unfortunately, the football landed outside the side of the end zone.

Scott Tolzien’s last pass is a doozy. NFL game pass tells me it’s an interception but that can’t be right. He can’t get two picks passing to the team’s best wide recei–yep. Yeah. There it is. He picked it off. He’s running. Oh no. It’s another pick-six. That’s two touchdowns by the Rams from Tolzien trying to pass to T.Y. Hilton. This time it was your standard issue telegraphed pass being picked off by a great corner in LaMarcus Joyner. Just regular bad instead of hilariously so.

I’m benching Hilton this week as the Colts take on an angry Cardinals defense looking to exact revenge on their embarrassing loss to the Lions in week one. While Scott Tolzien may not start, the other option is Jacoby Brissett. Stay away from Hilton until we know more about Andrew Luck or Scott Tolzien shows he’s a starting quarterback in the NFL. Jacoby Brissett was just okay in his time with New England. If you want to roll the dice with Brissett, I won’t stop you, but Tolzien is a no-go for me. Sorry, Hilton owners.