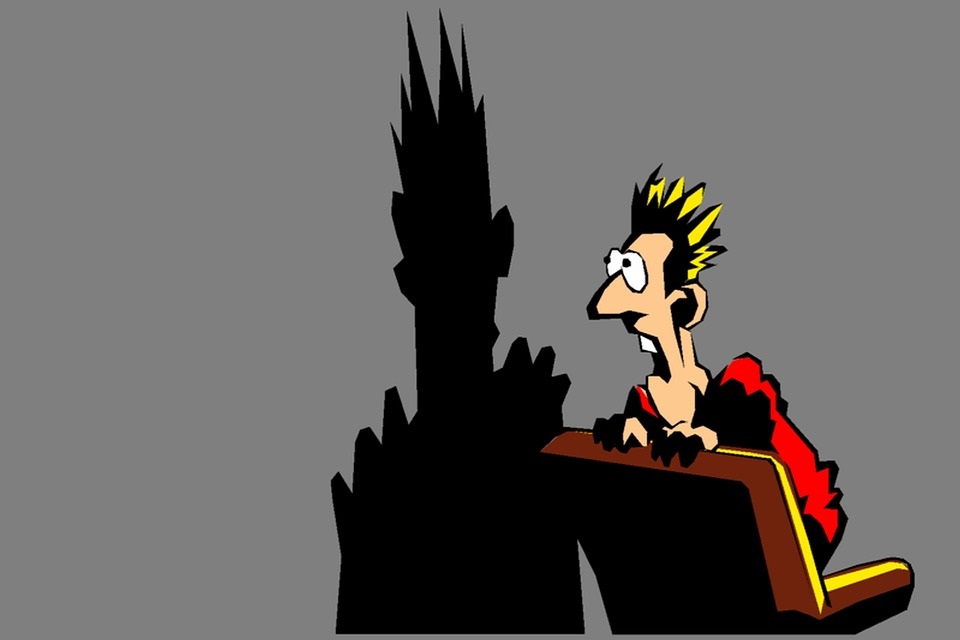 All great heroes have a flaw, or a crippling fear. Indiana Jones had snakes, B.A. Baracus had a fear of flying, the main character of Moonlight was afraid of werewolves (I assume. I did not see this movie).

A fear makes the hero more well-rounded, and endearing.

That’s one of the three ways I know that I’m not the hero of the story I’m living: My greatest fear does not make me endearing.

It actually makes me kind of annoying.

I really don’t have a lot of fears. Public Speaking? I love it. Death? Not a big fan, but I’m really tired all the time and lying down for an eternity has its appeal. But there’s one thing that makes me sit up in the middle of the night, covered in sweat and drool (the drool is unrelated).

My greatest fear is not being in control.

I’ll be the first to admit, that’s not the most fun thing to work with. Any upcoming event or project, I’m always looking to head up a part of it. Heck, I’m only supposed to be an intern at this site, they don’t even know I gave myself managerial privileges and changed all the passwords. I’m a pessimist, to me “if you want the job done right, you have to do it yourself,” is not just a saying, it’s a religion.

This is me building my apartment

People lament leaving behind their childhood, but one of the great things about being an adult is that I can structure my life so that I am in control. My home life, my choices of career, my kids, my diet.

Those of you who are parents and also frequently have beverages in your mouth probably did a spit take. I was kidding when I said kids are something I can control, having kids means having someone with the faculties of an infant in charge of most of your life (just like working under middle management).

In 2012 my wife became pregnant with twins. She also had a small fibroid (non-cancerous tumor) blow up to literally the size of a basketball. I have pictures of this enormous fibroid being pulled out of her, if you want to look (it’s gross, but not too gross. Like a 3 of 10 on the grossness scale).

For the final three months of her 7-month pregnancy, she was labeled “extremely high risk.” Anything could cause a miscarriage, after all her womb was like 40% twins and 60% giant rock feeding off of the food being sent to twins. She could sneeze too hard, and the whole thing would be literally down the tubes.

Most importantly, there was nothing I could do about it. Except, of course, wear a perma-smile and never let my wife know that every hour of every day of every week, I was living my greatest nightmare.

Then, my wife had our kids. Did you know there’s something smaller than a premature baby? They are called “micro premies.” My twins weighed five pounds… Total. For two more months I had to watch my sons live out the beginning of their lives in a plastic box. I could sit there, I could even lay a sanitized, gloved hand over most of their swaddled bodies. But I couldn’t hold them, I couldn’t feed them, I couldn’t stick the plastic tubes down their throats and into their veins.

There was nothing I could do to control the situation.

Back to that in a moment (and, frankly, I’ll be revisiting this fundamental part of my life many times in this column). But I want to talk about fantasy football. Weird, I know.

In fantasy football, whether draft or auction, the worst thing you can do+ is to give up control. You may be thinking like, “the worst I can do, actually, is draft Justin Tucker in the first round,” but this is MY ARTICLE and I say you are wrong (Justin Tucker owns).

He owns so much, I couldn’t find a fair-use pic of him kicking

Let’s examine how that works in fantasy football auctions and in snake drafts. I’m going to define “giving up control,” as “increasing the number of possible outcomes which could be determined by someone else.”

In snake draft, one of the biggest, most common mistakes is going into the draft planning to take certain positions in certain rounds. Like RB/RB in the first two rounds. This gives up a lot control of whom you pick, you’re left to sift through the remaining players at that position that haven’t been chosen already. Best Player Available strategy (or NIPS “No Intentional Positional Strategy”) gives you ultimate control: Any available player could be yours. It’s no coincidence that this is also the optimal strategy when it comes to building your team, just spend the later rounds stocking up on whatever position you ended up weak in.

Now, you all probably already knew not to key in on certain positions early in the draft. But how can we extrapolate this to some more gray areas of fantasy football? Let’s take three things that people seem to think are relevant during fantasy drafts: Bye weeks, strength of schedule, and teams you already have players on.

Bye weeks must be important, right? After all, it’s the stat listed on every draft board, right after the player’s name, position, and team. However, time has shown us that the constantly-changing nature of NFL rosters renders bye weeks irrelevant, for the most part. Sure, don’t choose a backup QB with the same bye week as your starter, but other than that it’s impossible to plan ahead far enough for a bye week to merit any kind of consideration. Of course, I already did that, because ignoring bye weeks gives me more control, more possibilities, more choices.

The same could be said of strength of schedule. Teams and defenses change from year to year, often with no logical sense. Fantasy football experts used to play close attention to strength of schedule, but now this is falling out of favor. People are finally catching up to the strategy I use as a coping mechanism for my own megalomania.

Finally, a lot of fantasy players are reluctant to grab a player from a team on which they already have a guy. Some players do the opposite and look to stock up on great teams. Neither of those appeals to me, as limiting my choices based on team takes some of the control from my hands.

Again, just choose the best player available. Use your NIPS!

The same control theory can be used to gain an advantage in fantasy football auctions. Don’t shop for value on the high-end players: That’s just placing control of whom you get into the hands of every other owner. A “value” high end pick is just some player that no one else at the table wanted. Get a few players you want, don’t worry too much about price, and fix everything up by shopping for bargains on less important players and positions. If you’re going to cede control, do it for players who aren’t in the top tiers.

My control issues are why I’m a fervent fan of only spending my nominations on high-end players I don’t want. It’s not enough for me to control my team, I want to control other teams by putting guys on them I don’t like before the guys I do like get nominated (by other owners, obviously). None of this cutesy, “nominate a player you like early, before the market is set,” nonsense: That just lets other owners dictate how much my guy is going to cost me. I’d rather exert control over how much he’ll cost by filling opponents rosters with other players in the same position, thus opening the door for more value.

They turn 5 in December, and take after their father in terms of control, through their relentless ability to derail any well-laid plans by their family like an ACL tear derails a fantasy team.