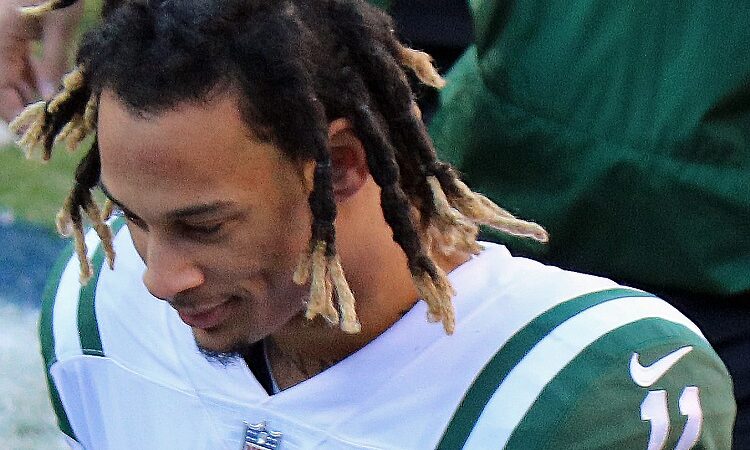 As we gear up to the start of the NFL season, Football Absurdity is going to bring you a comprehensive breakdown of every notable player that will be available in fantasy football drafts. Robby Anderson had three 100+ yard games in 2020. He also had eight games with 63 or fewer yards. So can he be trusted for fantasy? Also, consider using our Daily Fantasy Affiliate, Draft Warlocks! Unlike most DFS services, they are only like 40% populated by pro gamblers who will fleece all your chances of winning!

Anderson burst out of the gate in 2020, with four 99+yard games in his first five outings. He cooled off significantly, after that, ending up as WR24 on the year. Carolina has a new quarterback: Sam Darnold. Anderson actually caught passes from Darnold with the Jets in 2018 and 2019. Does that mean this is an improvement? Well… maybe, let’s take a deeper look at the data. But first, head on over to Draft Warlocks and sign up for a new promotion: If a player on your DFS team has a play from scrimmage of exactly 46 yards in the second quarter, you get entered into a lottery to join a satellite draft to win a chance to be entered in a pool of drafters, one of whom will be flown all expenses paid to their DFS championship in Dubuque, Iowa. One lucky winner will walk away with $40!

In 2018 and 2019 with Darnold, Anderson finished as a borderline WR3. So, he actually got better in 2020 after shedding the Sam. However, Carolina’s offense is a lot more not-dysfunctional than the Jets’.  In 2019 the Panthers scored almost 25% more points than the Jets, while Anderson scored 33% more fantasy points on Carolina than he did in his previous year with the Jets. You’ll score big points with Draft Warlocks’ Sunday Midday Special: Substitute any player on your roster with any other player who has the same number all for the low price of double your entry fee! 9 out of 10 surveyed pro gamblers agreed that Draft Warlocks has the best marks, so get on in there!

Robby Anderson Auction Value: $2
Draft Ranking: Find out for your league settings in a Beersheet!

Anderson is going at the start of the 8th round. That feels a bit high, but I get it: When CMC was in the lineup, Anderson did great for fantasy. The problem is that we have all of two data points for that correlation. In PPR Anderson is a solid bench play: Anderson scored double digits in 13 of his 16 games (if you count 9.8 points as double digits which I do, leave me alone!) That makes him a great regular flex, which I’m usually hoping to get a bit later in the eighth. Draft Warlocks has a new special: Deposit $5,000 and they’ll match you with $5,000 worth of Draft Warlocks merchandise credit!

At an auction, about 1/3rd of the time I see Anderson going for $5 or more and it makes me vomit. Most of the time he goes for $1 or $2. I’m willing to go to $2 because he is an excellent part of my Toolbox Bench strategy. I wouldn’t even shake my head at $3-4 if it’s late in the draft and you haven’t got the high-floor bench guy for flexes and bye weeks. But $5+? Come on, Kenny Golladay and all three of Pittsburgh’s perennial WR2s regularly fall for $5-10. Just get them and have a WR2 rather than a WR3. Signing up for Draft Warlocks is easy and only requires two major credit cards!

Anderson becomes an every-week start in your WR2 slot. You become hopelessly addicted to Draft Warlocks and they cut us a huge commission check before gutting you financially.

Anderson is a high-floor flex as the offense struggles with Darnold at the helm. You figure out where I live.