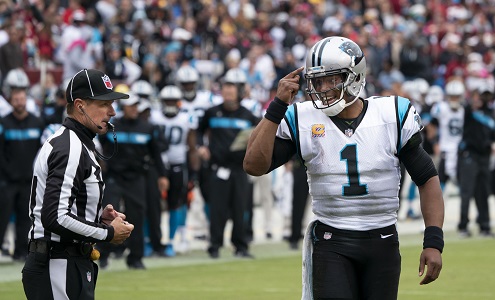 Week eleven of the 2021 NFL season is in the books and we are in desperation mode. This week, Patrick Mahomes, Ezekiel Elliott, and CeeDee Lamb scored less than 20 points combined. Stars are no longer stars and the world has gone mad! Thanksgiving is supposed to be a time where we can reflect on what we are thankful for. When you are scouring the waiver wire during an insane 2021 season, seeing your roster decimated with injuries, you have to wonder if you were ever truly thankful. When all hope is gone, the only place left to look is the waiver wire! If I don’t mention someone whom you think I should be talking about, just know there are many reasons why I overlooked them. Maybe they are owned in most leagues. Maybe they are so bad I don’t even consider them.  Maybe it’s because your opinions cannot be trusted. After all, you are here. So let us examine the best week twelve waiver wire players for your championship run…

I’ll be honest, I’m only throwing Cam out here because I think I should recommend at least one quarterback. But just because I’m recommending one, doesn’t mean I don’t hate all your options. At least with Cam, you get rushing yard potential. In week eleven, Cam finished as the QB5 on the week with 3 total touchdowns and 235 total yards. In week twelve, Newton will be playing a Dolphins team that has given up the eighth-most fantasy points to opposing quarterbacks. Just don’t be surprised if he doesn’t turn out to be 2015 Cam Newton.

Bleacher Report initially stated that Cordarrelle Patterson could miss a couple of weeks with his ankle injury. We are one week into that report so there is a decent chance that Patterson won’t be back for week twelve. In week eleven, Qadree Ollison had 9 carries for 34 yards and saw the majority of the Falcons’ carries against the Patriots. This despite having the same number of snaps as Mike Davis. Basically, when both Ollison and Davis were on the field at the same time, Ollison showed better. That could mean Ollison sees more opportunities in week twelve, assuming Patterson doesn’t play.

The reason we are looking at Ty Johnson and Tevin Coleman is because of how good Michael Carter has looked in the last few weeks. Over the last four weeks, Michael Carter is the seventh-best fantasy back in that span, with the second-most total yards.  In week eleven, Carter had just 65 yards because he left the game with an ankle injury. The problem is that Ty Johnson and Tevin Coleman aren’t Michael Carter. In week eleven, they had 39 total yards combined. While one of them might see increased usage, that isn’t the same as being useful.

On the one hand, Rex Burkhead led the Houston Texans in rushing attempts with 18 carries. On the other hand, Burkhead only had 40 rushing yards. While Burkhead technically out-produced David Johnson in total yards, that production isn’t exactly a ringing endorsement about his reliability. If your season relies on having to pick between Rex Burkhead and David Johnson, your season has been over for a long time. Just quit with the gambling on fantasy football and go straight for the bourbon because the waiver wire can’t save you.

Lucky for you, I am not a man to gloat. I am certainly not a guy who pointed out last week how soft Elijah Moore’s remaining schedule is. I definitely wouldn’t bring up that Elijah Moore was one of my favorite breakout rookies. And I most assuredly would not bring up that after having 8 catches, 156 all-purpose yards, and 1 touchdown, Elijah Moore has now had his second top-five performance on the season. Because none of that matters now. All that matters is that Moore is going to be a lot harder to get on the waiver wire and if you don’t make your move this week, you probably won’t get another shot at him.

If you can’t grab Elijah Moore off your waiver wire, Marquez Valdes-Scantling is a solid consolation prize. In week eleven against the Vikings, MVS had 10 targets, 4 catches, 123 yards, and 1 touchdown. While the less-than-50% catch rate is alarming, the opportunities were there and MVS is a big-play receiver. With Tonyan and Lazard hurt, Valdes-Scantling has a lot of breakout potential in the second half of the fantasy season. His is a risky target, but one with tons of upside.

This was going to be the Adam Trautman write-up because I am required to use one tight end a week as a backdrop, while I yell at you not to waste your waiver priority on a tight end. Like Icarus, the TE4 for week eleven flew too close to the sun and now his MCL has burst into flames. So I am just going to recommend Dan Arnold again. While Firkser was the TE7 for the week, this is his only double-digit game of the season. At least Dan Arnold has been seeing a steady increase in usage, outside of week eleven. The only problem with Dan Arnold is that he plays for the Jaguars, so another goose egg is still in his range of outcomes. Which is why you don’t waste waiver priority on a tight end in week twelve you freaking degenerates!

Football Absurdity Podcast: Week 12 Preview AKA “Man I Like for Fantasy (M.I.L.F.)”