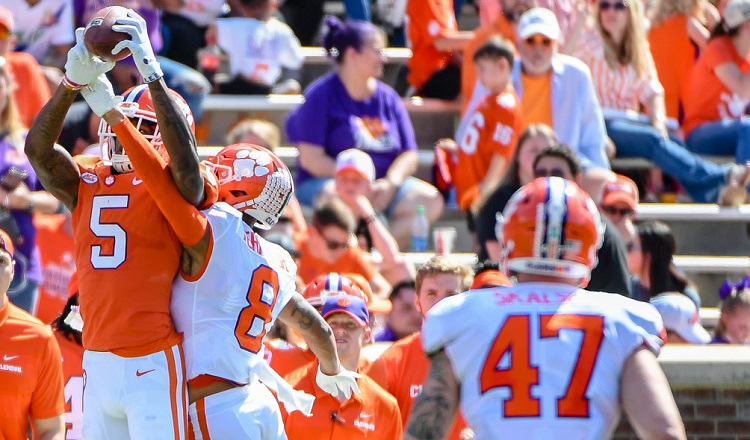 As we gear up to the start of the NFL season, Football Absurdity is going to bring you a comprehensive breakdown of every notable player that will be available in fantasy football drafts. We only look at the past three seasons for a player. This is because anyone who is looking at 2016 to figure out what to do in 2020 had better be Capcom figuring out how to not utterly screw up Street Fighter 6. Seriously, Capcom, get it together: SFV was an abomination. What’s not an abomination is Tee Higgins’ ability to bring in contested passes. Will Joe Burrow have the courage to feed the ball into tight situations enough to make Higgins fantasy relevant in 2020?

He doesn’t have any! He’s a rookie! Buzz off!

In order to properly evaluate Higgins, we have to examine a large body of his work. This can be difficult to do with a rookie, but we here at Football Absurdity are all about being thorough.

Tee Higgins was born in Oak Ridge, TN. Oak Ridge is a small city (under 30,000 population) that packs a huge punch: It has not two, not three, not five, but FOUR nicknames: The Atomic City, The Secret City, The Ridge, and The City Behind the Fence. In case you didn’t figure it out from those nicknames, Oak Ridge made and tested nukes. Could excessive radiation have made Tee Higgins grow mutant superpowers? Well, just ask the Oak Ridge Boys, whose crossover hit Elvira is no-doubt a tribute to a woman who definitely grew mutant-sized, um, powers.

In summary, Tee Higgins is looking good for fantasy, but let’s learn more. Maybe something that actually applies to football?

Tee Higgins played for Oak Ridge High School. Last season, he had 1,167 receiving yards and 13 touchdown catches for Clemson and has an older sister named KeKe.

Higgins joins a surprisingly crowded Bengals receiving corps that has A.J. Green, Tyler Boyd, and I guess I’m obligated to mention John Ross. Also, rookie quarterbacks rarely make quality options out of their wide receivers, let alone their third receiver, who is also a rookie, in a crowded corps.

Tee Higgins Auction Value: $1
Draft Ranking: Find out for your league settings in a Beersheet!

Draft strategy? Dude is at-best the third wide receiver on a run-first team with a rookie signal-caller. I had to pull out the Oak Ridge Boys to find something remotely tangential to say about him, that didn’t tell you anything? Last year, there was a bunch of quality rookie WRs that were all in the free agency pool after week one. Guess what? This year’s receiving crop is even better than last year’s. They’re really great. Get your rookie WRs with FAAB dollars, not draft capital.

You live in the greater Cincinnati area and someone in your draft gets all homer-ey and reaches for Higgins.

You live in the greater Cincinnati area.