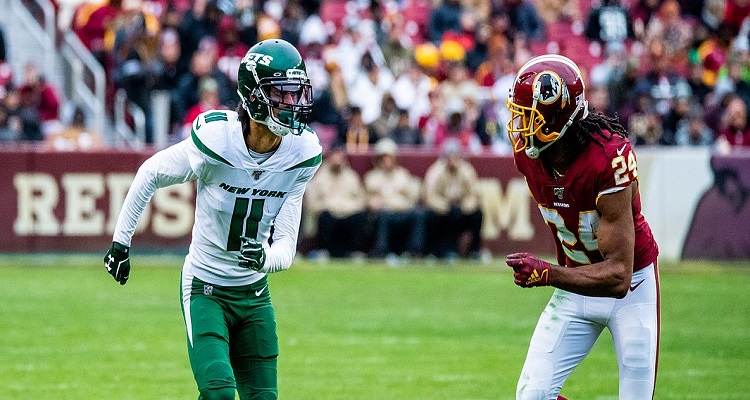 As we gear up to the start of the NFL season, Football Absurdity is going to bring you a comprehensive breakdown of every notable player that will be available in fantasy football drafts. We only look at the past three seasons for a player. This is because anyone who is looking at 2016 to figure out what to do in 2020 had better be Coronavirus studying where Zika fell short. Robby Anderson got a $10 million/year contract from Carolina, but is he worth any of your draft capital?

So, come on in and have a seat. We’re all here because we love you and we want to help you get through this.

No one’s judging you, it’s easy to see the initial appeal of Robby Anderson: He’s reconnected with his college coach. He’s actually on a good offense for the first time ever. He sometimes catches the ball.

But Anderson addiction has cost some people millions of dollars. He’s finished 16th, 36th, and 39th among wide receivers in the past three years, despite playing in at least 14 games every season. His specialty is the deep ball, and Bridgewater’s deep ball is so inconsistent Panthers beat writers have to write articles pleading that everyone’s acknowledgment of that is totally wrong.

He couldn’t produce when he was pretty much the only offensive threat on the field, so why are you expecting him to produce as the Panthers’ fourth banana?

Robby Anderson Auction Value: Come on, don’t waste a valuable instant reading this when you already know what it’s going to say.
Draft Ranking: Find out for your league settings in a Beersheet!

If I haven’t convinced you to put the Robbie down and move on by now, it’s not going to happen. You’re clearly going to pick him just to spite me. You definitely have an antagonistic relationship with your dad.

But if you’re going to so reckless with what you put in your body (of your fantasy lineup sheet), then at least be safe about it. Grab him in a late round or for only a dollar at most. Anything more and you risk a serious overdose that could kill you (in your fantasy league).

You listen to my advice, but Anderson becomes a serviceable WR2, which is sooooo rare you should hold a grudge forever. I mean, how many wide receivers end up ranked 13-30? Just this guy.