Time for Hot Takes from Crazy People, where I find the craziest comments from NFL articles. I’ll just mosey on over to Yahoo! NFL and take a look. Hmm, what’s this?

Oh, no, I’m slowly moving my mouse towards the article. No, Evan, don’t click it! Augh, I’m clicking it! I’m in a horror movie and I’m shouting at myself to not hide in the basement.

I’m scrolling down to the comments section. Because I hate myself. I’m a bad person, and I deserve to be punished. Since I can’t go to the morgue and stare at motorcycle accident victims, I’m going to punish myself by reading the comments of a Trump NFL article.

Okay, cool, anyone got any opinions on black people?

No, that’s technically an opinion on a white person. Someone help me out.

Okay, so I’m post-morteming this train accident of logic… If “those people” cared more about housing and education then the Powers that Be would fund housing and education more. But instead, they care about football and basketball, so that’s where the government money goes. Okay, but they also say that this “demographic” is obsessed with rap music, so they are implying that a large chunk of government spending funds… rap music? Damn, that’s obtuse. I need a comment that’s much more direct. 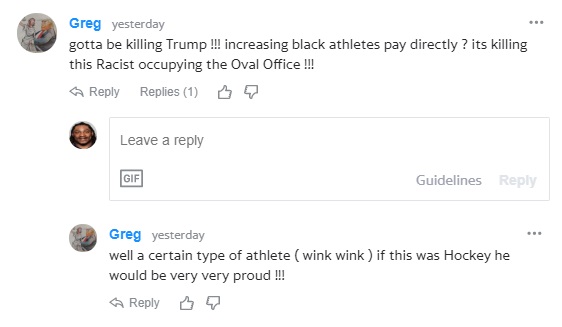 So… he replies to his own comment with “a certain type of athlete (wink wink),” but in his original comment he already came out and said “black athletes.” This person seems senile. Let’s transition to people who argue poorly:

Dude, I’m not picking sides in politics, but just speaking in terms of an argument’s strength: If you back up the claim that Republicans are bad for the economy with only one example that’s 90-freaking-years-old, you’ve lost your own argument.

Let’s wrap up this article with a few horrifically-bad spelling errors, including the best misspelling of “cyclical” I have ever seen:

Finally, a poster asks the question that’s on everyone’s mind:

Okay, I did my horrible chore, time for a palate cleanser. Let’s check out people arguing about the NFL Pro Bowl selections, and not speak of people posting about Trump, ever again:

No! Stop! Someone say something about a current NFL player…

Gah! Does anyone have an opinion on Pro Bowl inclusions or snubs?

That’s kind of a weird grudge, but I’ll take it. What else we got?

That’s actually an opinion, which is the opposite of a fact. An example of a fact would be, “Edelman is 19th in the NFL in receiving touchdowns and 13th in yards. He ranks outside of the top 20 in the AFC in first down receptions on third down, and is 47th in the NFL in catch percentage.” Now let’s hear from a frustratingly vague conspiracy theorist:

Now let’s watch someone who is too dumb to live get racist: 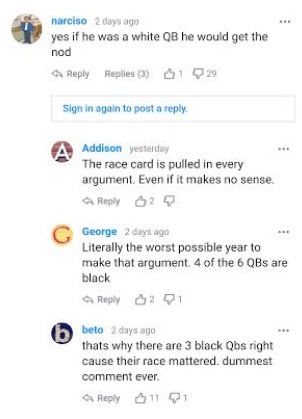 Finally, someone who has not turned on a Patriots game in the past few months:

Got to run, I need to proofread this article which involves pushing my now-liquified eyeballs back in their sockets.

One Comment on “Hot Takes from Crazy People: Footballs Is a Scam”