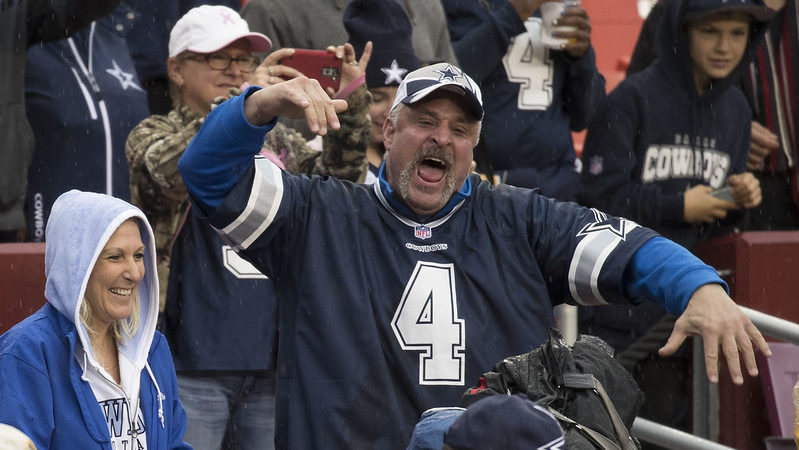 Ah, Thanksgiving. That time where friends and family all get together and act like the whole situation isn’t a delicately balanced powder keg sitting three stories above a tire fire. To stave off insanity, we plop in front of the television and mindlessly watch the NFL Thanksgiving Day games. You might find yourself desperately trying to steer the conversation back to the game when they mention something on the broadcast that sets off your relatives. If you’re wondering how to sound smart at football, here’s a breakdown of the 01:30 PM Pacific game. We already have you covered for the morning game here.

Rivalry-defining moment: The Bills lost to the Cowboys twice in their four consecutive Super Bowl without a victory streak. Neither team has been back to the Super Bowl since 1995.

Things have gone according to plan for the Bills, who are surging behind a great pass defense and a vertical threat offense. For whatever reason, they’re still giving 85-year-old Frank Gore 10-15 touches per game, so they could be even better than their record indicates. They’re feisty, and currently, have the third-best record in the AFC. Unfortunately, they have no shot at the division thanks to the 10-1 Patriots running the show. They should give the Cowboys a run for their money.

The sophomore QB was once considered to be a joke who had an ability to run and a strong arm, but no touch or accuracy. He hasn’t done a ton to dispel this perception, as he has scattershot accuracy at times. He’s led the Bills to an aggressively average offense, which has been just enough for the defense to take over games to lead them to victory.

What to Say: “Yeah, Josh Allen can throw the ball over a mountain, but he needs a target as large as ‘the other side of that mountain.’”

Another one of the Bills hot young talents, Tre’Davious White is among the best cornerbacks in the NFL. There’s a likelihood you hear his name frequently whenever Dak Prescott chooses to not put the ball in Zeke’s belly. White is second in the league in passes deflected and is one interception off of the league lead. You should hear his name often, given the strong Cowboys receiving corps.

What to Say: “Who is White on, Gallup or Cooper?”

The man known as “Smoky” had an inconsistent first few years in the league. He had a cyst on his spine drained, and everything has been hunky-dory since then… except when he and Lamar Jackson couldn’t hook up down the stretch last year. Now he’s Josh Allen’s favorite target, and is ninth in the league in receiving yards, and is one touchdown off from being top-seven in scores. He’s a smaller, faster guy and is likely to have a long touchdown in this one.

What to Say: “It’s a great thing that John Brown landed on his feet with a quality quarterback after having to deal with 2019 MVP front-runner Lamar Jackson last year.”

America’s Team. Jerry Jones’ vanity project. The favorite team of the annoying person you used to date. The Cowboys love to live in the past and remind you that their next championship is right around the corner, despite not having even been in one for 24 years. They’re led by a young upstart quarterback and a younger and more upstarter running back. They are 6-5, but the media tricked us all into thinking they were Super Bowl contenders this year. They always get a home Thanksgiving game, because they’re America’s Team™. Nobody is really sure what that means, because everyone hates the Cowboys.

The Cowboys and their young QB were at loggerheads in the pursuit of a new contract this offseason. However, they were unable to pull it off, and it’s a story you’re likely to hear about 1,000 times on Thanksgiving. Prescott has played extremely well this season, ranking top-five in passing yards, passing touchdowns, and QB rushing touchdowns. Unfortunately, he’s also top-five in most interceptions. It’s a rollercoaster with Dak under center, though things are mostly good.

If you’ve seen one guy on the Cowboys, it’s probably “Zeke.” He’s the guy with the wild hair and wild beard and belly shirt showing off massive abs. He also looks like Wicket the Ewok from Return of the Jedi. He got paid this offseason, and his six-year, $90 million contract makes him the highest-paid running back in the league. Unfortunately, he isn’t playing up to that contract right now. He’s still doing fine, just not “best running back in the league” good.

What to Say: “The guy gets paid and he goes out and is on pace for his lowest yards per game of his career. Where’s the production they’re paying so much for?”

Cooper, like Khalil Mack to the Bears, was part of the Raiders bleeding players for picks at the beginning of the Jon Gruden Era. He’s now spent 20 games with Dallas, and in those 20 games, he has 1,600+ yards and thirteen touchdowns. He’s having a literal career year this season after years of people hoping for a massive campaign from him in Oakland. Like Dak, he’s facing a big payday.

What to Say: “Amari Cooper just needed a quarterback he could click with and he could finally produce up to his potential.”

If all this fails, just remember the old NFL Thanksgiving Day game standbys:
“Man, they just have to let them play out there!”
“How is that not holding?”
“That hasn’t been pass interference all game, why are they calling it now?”
“Establish that run, baby! (include loud obnoxious clapping)”
“You know, this is four-down territory. You need to go for it here!”

Or the most time-honored NFL Thanksgiving Day game tradition: just going to sleep instead of engaging with your relatives.