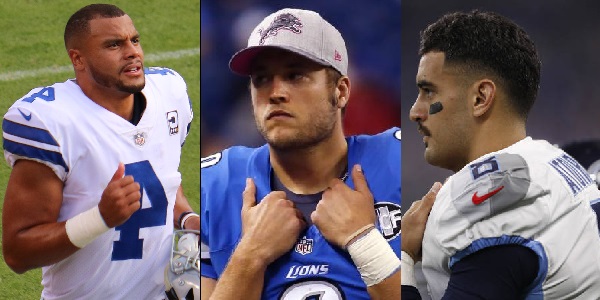 Whether they’re young and daring or old and flighty, quarterbacks are the foundation to any good fantasy football team. This late in the regular season, statistics paint a less complete picture, making decisions this late in the game difficult and, at times, depressing. Get outta that funk and take a gander at these thoughts as to why you should start or sit these ball-chucking athletes.

The Dak attack is back, Jack! At least that’s what you might hear from a 90’s kid who loved The Mighty Ducks. With an extremely poopy start to the season, poor Prescott only managed an average of 192 yards through the first five games. Some adjustments here and there have led Dak to a much better run of games. In his last five, Prescott has managed to average 256 yards while only throwing one interception in that run. While his numbers have skipped around a tad, his performance has clearly gotten better. With a stud like Elliot ready to stampede the ball on any given play, Dak has still taken to the air on many plays. His passing ability is getting more credit as the season moves along, as it should. He’s had at least 30 passing attempts in the last five games, which shows the Cowboys aren’t putting all their weight on Zeke. It also shows that coaches are starting to see how well Dak can do when you give him options, which should definitely inspire some hope in all the owners out there considering whether to start or sit Dak Prescott. Playing against New Orleans is also ideal, seeing as New Orleans are one of the worst in the league at giving away points to quarterbacks. They’ve allowed an average of 277 passing yards a game to opposing quarterbacks. They’re also playing in Dallas, where the Cowboys have only lost once this season. With a three-game winning streak lighting the fire under Dak Prescott’s ass, we can expect both a high floor and ceiling in this ‘too good to be true’ matchup. Consider Prescott a definite start.

Isn’t Stafford cute? Somehow every time I look at him, I still see that young kid that came into the league so long ago. While he may be an older, angrier man, Stafford still has magic in those fingertips. He’s constantly been tormented by a terrible offensive line, but things are getting better for Stafford this season, and especially so this week. The Rams have done a poor job in their defensive efforts against quarterbacks. They’ve allowed four 300+ yard passers this season, allowed 13 passing touchdowns in the last three games, and allowed 25 passing TDs through their first 11 games. Simply put, quarterbacks have a decent floor against their defense. Stafford’s numbers have been anything but consistent this season, but a lot of that has to do with his turnovers. Four interceptions through the last three games have prevented his scores from looking appealing, but he’s still throwing for at least 220 yards through the last three, averaging 258 yards per game and throwing for over 300 twice this season. The Rams defense did have three picks in their wild game against Kansas City, but registered none in the three previous games. They actually have six games this season without an interception, which is over half of the games they’ve played. For those of you considering whether to start or sit Stafford in leagues where the QB position is sparse, It’s simple: If Stafford can avoid throwing picks, which seems likely against the Rams defense, he should be able to have one of his best games of the season. Stafford in week 13 at home is a definite start.

Mariota’s definitely one of those quarterbacks that can be head-scratchingly bad, yet puts up decent enough scores on games with low passing attempts to make you wonder where the magic comes from. Regardless of what cards he has up his sleeve, Mariota is starting to actually look good on paper late in this 2018 season. It’s okay to wonder if you should start or sit Marcus Mariota. He has six touchdowns and one interception through the last four games, off a surprisingly low average of 22 passing attempts. When they win, their score looks great. When they lose, they look like amateurs. On losses they’ve averaged 13 points a game. On wins they’ve averaged 23.4 points per game. While they’re not an explosive offense, they can get the job done utilizing both their passing and their run game. The Jets are close to the middle of the league in points allowed for quarterbacks, but more importantly they’re 1-4 on the road this year and in the middle of a five-game losing streak. With the Titans at 5-6 in a close race with the Colts in the AFC South, their motivation to win at home will be much higher than New York. Mariota will be coming alive, so consider him a safe start this week.

These guys have all proven to us in the past that they know how to perform. The spot they’re in this late in the season is truly what’s going to affect their performances. While the Cowboys enjoy their number one spot this week in the NFC East, it’s still a close race for all three teams. Wins this week are extremely important, and all three of these quarterbacks can perform when the stakes are high.

If you are deciding between these players, here is how I rank them:

View all posts by Will Button →