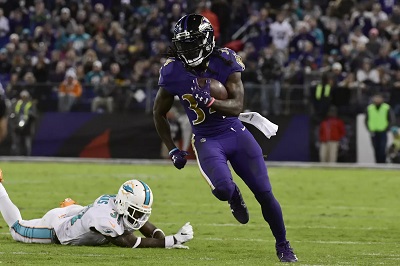 Week eleven is upon us, which means that some of us are just two games away from worrying about our fantasy football playoffs. If you’re still reading this, congratulations, the marginally-long slog of the fantasy football season hasn’t broken you yet. Every week, we at Football Absurdity like to highlight players with marginal matchups that you might get a wild hair about. We hope to provide you with some basic facts to help you inform your decisions. This week’s start or sit continues with three RBs who have fought crowded backfield situations… and won.

Cover up his touchdowns column, and Collins doesn’t exactly inspire a ton of confidence for his fantasy football owners. He’s yet to total more than 90 yards in a game (and hasn’t rushed for more than 68 in a game). He’s in a shared backfield with goal-line vulture Buck Allen, and the Ravens went out and snagged a receiving back in Ty Montgomery. While TyMont hasn’t made his Ravens debut yet, it seems as though he’s a replacement for Buck Allen, not a complementary back that will steal from both Allen and Collins. Buck Allen’s role shrunk precipitously prior to Baltimore acquiring Montgomery, anyway. The good thing about all of this is that it means more for Collins in and around the goal line, and that has already come to fruition. Four of his six touchdowns have come in his last four games and thirteen 9+ point fantasy days to running backs in their last nine games. Collins should run buck wild and is a great starting option this weekend. He hasn’t been all that impressive as a back, but this could be his best game of the season. If you’re lucky enough to be in a position to decide whether or not you should start or sit Alex Collins, I would definitely start him this weekend.

Once upon a time, Arizona allowed the most fantasy points per game to running backs. This time was like… three weeks ago, so don’t think a lot has changed there. They’re down to fourth in the league, so it’s still a great play to go against them. They’ve yielded 4.8 yards per carry to running backs over the last five weeks, which is among the worst in that category. Now, it’s a great matchup but here’s the rub: Doug Martin is not good, and the Raiders are even worse. However! There’s been one consistent to Jon Gruden’s gameplan: pounding the gosh darned rock. Marshawn Lynch averaged 15 carries a game during his time as the starter, and Martin has averaged 13 a game (including 15 last game). He’s been able to turn this into 60 or more yards two out of those three games, which shows that he can do something with his touches. Luckily, the slowly moving force goes up against the moderately-decent-at-stopping-things object, and if you bang into that subpar defense enough times, you should burst through. Call it a floor of 65 yards with a chance for a touchdown, and those debating whether to start or sit Doug Martin should know: He is definitely worth a start this weekend if you are desperately searching start or sit candidates thanks to the mega byepocalypse.

Start or Sit Peyton Barber at the New York Giants

Man, the Buccaneers have been dedicated to bashing Peyton Barber into that offensive line, haven’t they? He’s eleventh in the league in carries over the last five weeks. In a byepocalypse like this week, you can only ask for your desperation “oh no let me scour the internet to see if I should start or sit this guy” running backs to be volume hogs. Some quick back of the napkin math puts his floor at about six or seven fantasy points, with a good shot at a touchdown. That’s not too insane, considering the last two backs to face them went for over 100 rushing yards at over five yards a clip. He’s not always a great start, and he doesn’t have a massive ceiling, but there are worse players you could start this weekend if you’re betting on volume and matchup. Start him in a break glass in case of emergency situation.

These three running backs have not been set-and-forget guys, and they all had to shake off shared backfields to get where they are. They are marginal RB2s on a weekly basis. This week I would go: