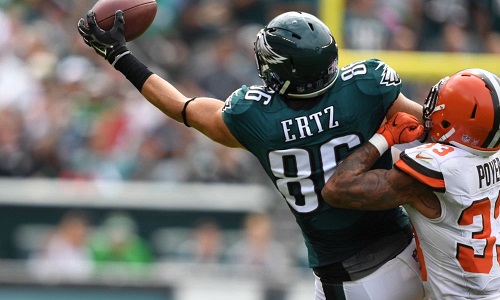 Whether to start or sit C.J. Uzomah is annoying to predict. He gets 8.3 or more fantasy points in two straight games, and then he lays a big fat goose egg. Literally zero catches. Then he fades into obscurity for a week, and A.J. Green suddenly may miss the rest of the year. Will Uzomah pick up the slack? Can he become the go-to touchdown guy? Maybe? Is that a good enough answer? I don’t trust Uzomah right now, and despite what should be a high-scoring affair, I think that the tight end will be touchdown-or-bust. The Bengals will need to push the ball, which means not a lot for Uzomah. Shying away from Uzomah is probably a good thing for the Bengals, as the Saints have allowed just one touchdown all year, and no tight end since O.J. Howard’s 54 yards in week one has gone over 48 yards against them. C.J. Uzomah’s ownership proves that he is not a set-and-forget TE, and is in the weekly start or sit conversation. Unless you’re exceptionally desperate, C.J. Uzomah is a sit this week.

WARNING: IF YOU ARE ERIC EBRON, PLEASE DO NOT READ THIS. PLEASE KNOW THAT YOU ARE STILL THE BEST. AND I LOVE YOU.

Now that that’s out of the way, sit Eric Ebron this week. Jack Doyle is back, which throws the formerly #2 overall TE on the season’s start or sit status into doubt. Inexplicably, Doyle gets all the targets and yardage between the 20s, leaving Ebron to just catch touchdowns and get red zone looks. This is all to make sure guys like Zach Pascal and Chester Rogers get looks instead of just running a dang two tight end set like Andrew Luck already ran with Coby Fleener and Dwayne Allen FOR YEARS. Anyway, Ebron is unlikely to get those red zone looks this week, and even if he does, it’s unlikely he converts. The Jags allow the eighth-fewest fantasy points to tight ends, and non-Eagles tight ends have only scored one touchdown against them this year. I am sorry to say it, but the answer to whether you should start or sit Eric Ebron, given situation and opponent, is a sit this week.

This one isn’t really a firm sit for Ertz, it’s more a… fair warning? Ertz has shown over the last few weeks that he can be schemed out. A touchdown saved his anemic four catch, 26-yard game last game and his 43-yard effort two games ago. It’s unlikely you can get away from Ertz, but his scores have helped to hide some bad games. Granted, in there are three 110+ yard days in his last five games. I’m not stupid, I know you have to start Zach Ertz. However, I would temper expectations with him against Dallas this week. The weird Jonnu Smith flip play was the first tight end touchdown they’ve allowed since Evan Engram week one, which was also the last time anyone went over 65 yards against them. You can’t honestly have a start or sit Ertz discussion, but this sit is more a “strongly warning you to temper your expectations.” Bets, consider yourself hedged.

All three of these guys are not the best starts, but if you’re looking to decide who to start or sit among them, I would rank them as:

We also do comedic think-pieces! Check out Can a Woman Play Football? Five Ladies Who Could Start in the NFL