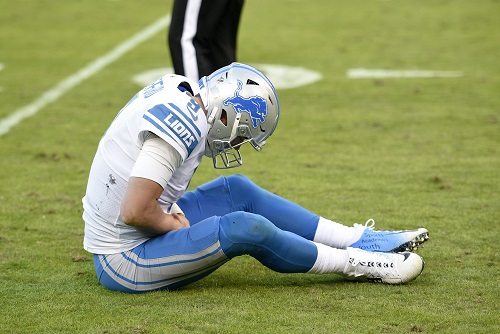 Things got bleak in a hurry for Matthew Stafford last week. The poor guy became a human-sized Weeble for the Minnesota defense, as they sacked him ten times. While the Lions line has been good this year, it was his first game without Golden Tate, and nothing seemed to work out well for the offense. The fun-slinger had averaged 271 yards, two scores and a pick every third game in the six games prior, so it was an unusual turn of events for Stafford. Expect more of the same this weekend against Chicago, who should finally have Khalil Mack back. Excepting the strange Brock Osweiler game, and going up against two GOATs, the Bears have stymied opposing quarterbacks. They have allowed just one 300-yard passer this year (and it took five quarters), and they have more multi-pick games than multi-touchdown games allowed. After last week’s display, it’s not a huge deal to wonder if you should start or sit Matt Stafford, despite his consistent track record this season. However, he is a sit this week against his divisional foes.

Crazy, right? The GOAT QB is likely poised to have a down week and is a player you should look to sit this week if you have the legitimate call to start or sit Tom Brady. He has one or fewer touchdown passes in three of his last four games (and the Patriots have averaged 34 points in those contests). He and Bill Belichick have shown a willingness to let the game come to them, and scheme away from opposing strengths. The Titans have allowed fewer than sixteen fantasy points to opposing quarterbacks in four of their last six games, and haven’t allowed more than two passing touchdowns all week. Then again, he’s Tom Brady, which means he’ll break through and score 40 fantasy points against the Titans. Personally, I don’t trust that enough to start Brady if I have a legitimate opportunity to sit him this week.

Start or Sit Nick Mullens versus the New York Giants

Yes, Nick Mullens had an amazing night. That had more to do with the Oakland Raiders, who have quit entirely, than Mullens. He pulled off 262 yards and three scores against tackling dummies in Oakland, but he doesn’t get them on Monday Night Football. Instead, he gets a Giants squad that has allowed just two 20-points fantasy days to quarterbacks this season. While he was a great story on Thursday Night Football, you should not strongly consider whether to start or sit Mullens. Keep him on your bench and sit him, unless he gets the Raiders again, somehow.

None of these guys are great plays this week, but if I had to decide whether I should start or sit them, I would go: