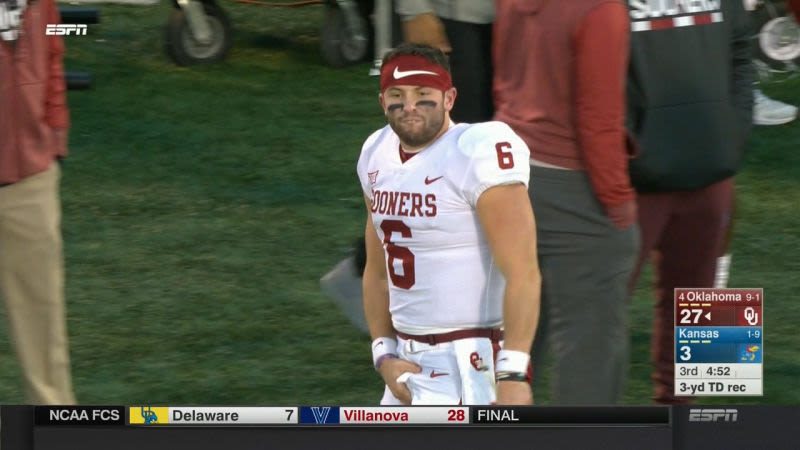 If one of these guys can’t help you, then you probably already lost. Might I suggest Derek Anderson as a QB sleeper, in that case? It’ll be funny, at least.

Mayfield was on the QB sleeper list last week and had the best game of his young career. Granted, he did it against a Tampa Bay defense that is top-five in fantasy points allowed to opposing quarterbacks. This week, he gets the Steelers. They are also top-five in fantasy points allowed to opposing quarterbacks. Since getting the full-time role, Baker averages over 40 passes per game. In their six games this year, four quarterbacks have over 40 pass attempts against them. Their average line: 300 yards, two touchdowns, one interception. No rounding, literally a “pretty good” fantasy football game. Oh, and this doesn’t count Patrick Mahomes’s six-touchdown game (he only needed 28 passes for that one).

This isn’t the best recommendation, I understand that. The only problem is that ownership numbers are all wonky thanks to bye weeks. So, you get a recommendation that you start Case Keenum in KC. I understand that CK in KC isn’t the best recommendation since the Chiefs allow a full touchdown less at Arrowhead than on the road. However, you can squint and see a decent game out of Keenum. Before the Broncos whooped up on the Cardinals and Keenum didn’t need to throw, he had 22.08 and 20.48 fantasy points (4 points per passing touchdowns) in his previous two games. He aired the ball the heck out, throwing for 45 passes a game for 350 yards and two scores a contest. He’ll need to air it out against KC just to keep up. For their part, the Chiefs have allowed at least 21.8 fantasy points in all but two games this year, and that includes a game where Handsome James Garoppolo had to leave early. He could be among week 8 QB sleepers, but he’s not overly recommended.

Beathard’s last game was downright terrible, throwing for 170 yards, a touchdown, and two picks. But that was against a Rams team that was constantly in his lap all game. Luckily, the Rams aren’t on the docket this week. Beathard instead gets the lowly Cardinals (a game nobody wants to watch). On the season, the Cards give up very few fantasy points to quarterbacks, but that was mostly on the back of a mostly-broken Russell Wilson game and taking on the Bears before their offense changed the difficulty settings down. There’s also the game last week where they were beaten down so bad that Case Keenum didn’t need to do anything. Beathard has three 20+ fantasy point games in 6 points per passing touchdown leagues in four tries. Call me skeptical that the Rams, the only team to stop him, have defensive compatriots in the Cardinals.