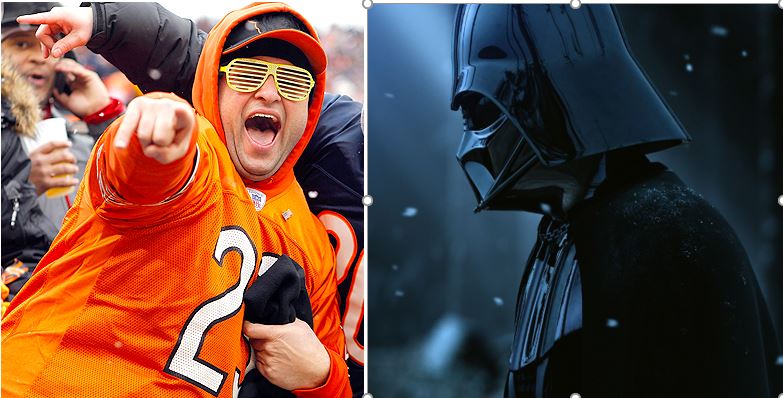 How do you think the Khalil Mack trade makes your team better?

Going into the 2017 NFL Draft, most experts felt the biggest weakness on the Chicago Bears was their lack of depth at outside linebacker. The Khalil Mack trade instantly turns the biggest weakness on the Chicago Bears into a position of strength. The plugged in a former defensive player of the year and three-time Pro-Bowler onto the most important part of their defense. The Bears just put themselves into the conversation of the best defense in the NFL.

Losing the best player on the Raiders definitely makes them better, so great, our defense is a box of Kleenex, I’m sooooooo happy about this extremely dumb development. Now we get a bunch of draft picks that Gruden and Marc “Flowbee” Davis will inevitably screw up when the team isn’t even in Oakland anymore. I get to watch an entire season of the Raiders all-time worst defense screwing up any chance for Carr and whomever-the-hell-Gruden-decides-to-put-on-offense to ever keep up with the score.

What do you think of the cost/return of the Khalil Mack trade?

While two first round picks is a steep price, I think this is a move the Chicago Bears had to make. I can’t remember a time in the NFL where a defensive player of that caliber was available in the prime of his career. When you draft someone in the first round, you are taking a chance that you will win the lottery. But like the lottery, you are going to miss a lot more than you hit. So why play the lottery, when you can just pick up a bunch of cash someone left lying on the floor. I’m saying Khalil Mack is found money.

The fact that it wasn’t just “two first-round picks straight up” shows that the people in charge are horrible negotiators that get bent over more tables than a busboy. Let’s look at previous first-round picks of the Raiders:
2017- Gareon Conley: Injured for almost all of 2017
2016- Karl Joseph: All-Rookie Team, but injured last 4 games
2015- Amari Cooper: Aggressively mediocre
2014- Khalil Mack: Amazing, all-World player that any team would be crazy not to want
2013- D.J. Hayden: Constantly injured
2012- No pick
2011- No pick
2010- Rolando McClain: Bad. Also crazy.
2009- Darrius Heyward-Bey: Horrible
2008- Darren McFadden: Useless
2007- JaMarcus Russel: Knucklehead
I’d say the Raiders were crazy for trading Mack for two dice rolls, but it’s not really a dice roll if the outcome is always horrid.

How do you think the Khalil Mack trade affects your team in the short term?

I think the fact that the Bears were willing to pay Oakland’s asking price means that they think they are ready to compete for a playoff spot this year.  Clearly, they felt that they had the core players they needed on their roster and decided to put the final piece they needed in place.

We’re going to lose every single game and allow the most points in NFL history. I took a look at the teams which allowed the most points in a season, if only because I needed a break from thinking about the Raiders’ horribleness. The 1981 Colts allowed 533 points, a whopping 33.3 per game. That’s what I’ll be rooting for now, to give me some joy in watching the Raiders D get beaten repeatedly.

How do you think the Khalil Mack trade affects your team in the long term?

I think long-term, the Bears are going to come out ahead. They are taking advantage of having a quarterback on their rookie deal to invest in their skill positions. This is a team that should be poised to compete for a Super Bowl within the next two years.

My dad is in the final stages of cancer. Most of his days are spent listlessly sitting in his chair, wishing he had the physical ability to do the things his still-active mind is clamoring for. He’s a prisoner in his own body. When I look into his eyes, I see the Raiders. By next year they’ll have moved on to whatever comes after this life. Maybe Heaven, maybe reincarnation, some say Las Vegas. But they will continue to be a team with the rare potential of a decent starting quarterback entombed in the prison Gruden is building around them.

Who won the Khalil Mack trade?

I think the Bears won this trade, no questions asked. They are adding one of the best defenders in football to an already strong defense. With the addition of Khalil Mack, there are no visible holes on the defensive side of the ball.

Al Davis’ cackling ghost, feeling the joy of realizing he actually wasn’t the worst person to run a team in the history of football. I hate him, I hate his spawn, I hate Gruden whose name I just realized rhymes with “boo him.”