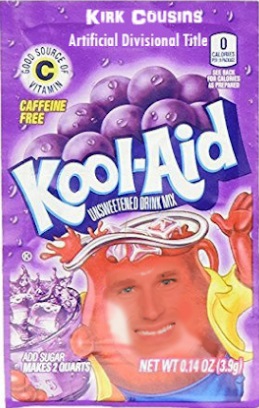 The NFL (and football bust) season is just a few short weeks away from kickoff and the preseason hype is nearing peak ripeness. There’s a football bustle in the air as we, as a nation, pause and give thanks that we don’t have to pretend to give a crap about Major League Baseball anymore.

Maybe you’re a fantasy football rookie, and if that’s the case, welcome and thank you for your donation. Returning players are hooked for this time of year to a point that ESPN will shuttle in what appears to be a collection of washed-up tee ball coaches who got a shopping spree at Jos. A. Banks for a twenty-nine-hour marathon of fantasy football bust and breakout analysis. It’s great to be excited, but no one wants to be the guy in face paint at the pre-season games.

The NFL is great because, frankly, it’s the only league where we regularly see teams and former football busts go from doormats to contenders in a single off-season. 2018 is no different than other seasons. We’ve thirty-two teams. Not all are contenders, but all have hope. Right now, it’s like the first weekend in college: no one knows who the loser is, and if you’re not careful you’ll wake up with a pony who sputtered out ¼ the way through.

Analysts across the networks are chirping about who’s going to make their teams amazing and thus our fantasy season a different story from last year. Let’s pump the breaks. I’d love for all these hype monsters to be real… but the truth is, you can’t win ‘em all. Sit down and pour one out for your over-inflated savior’s promise.

They said, “hey can you photoshop some faces into Mike Maxwell’s article?”

Oh, boy, how we went from a NFC championship of backups to this, an offseason acquisition of Mr. Midwest: Kirk Cousins. Now in the Twin Cities, Cousins is full of expectations. Can he get a franchise over the hump and finally into the Super Bowl for the first time since 1977? Nearly 50 years later?! NO PRESSURE KIRK!

The NFC North is the Vikings’ to lose. That’s a fact. The NFC North is a benign division that epitomizes midwestern culture. Let them win a division but never the whole thing. This team is built for 12-13 wins and any less is because of injury. Please, oh please tell me how the Lions are going get it right this season. Getting out of the division will be no problem for the Vikes. Can Kirk pony up and, say, win two or three games to immortalize himself?! No, not this season. He’s nice and as they say, nice guys finish with guaranteed money not guaranteed titles. He will football bust like a brick wall when someone says, “Hey Kool-Aid!”

I replied, “I’m just an intern.”
They said, “do the photoshops or you can in-tern in your I.D. badge and leave.”

I sit in the Chicago area and there’s so much hope in Mitchell Trubisky you’d think his last name was Obama. Is he the answer? Maybe. It’s more that the last eight years weren’t the answer so Trubisky is Chicago’s first boyfriend in a decade that can looks like he can pay his own rent and maybe take us out to Bongo Room for a nice brunch.

Last season, the Bears signed the one quarterback who looked more apprehensive to be a football player than Eli Manning, Mike Glennon. Now we have a guy, who looks like will walk the walk. Let’s give Mitch some time to develop, he’s going to make some mistakes but most importantly, he’s going to stay in there and fight. Trubisky is the next coming of Blake Bortles, who came from a non-big FBS school, with fundamental praise and Abercrombie door greeter personality. The Bears are poised for six wins this season and I hope they get four or five for draft purposes. This means Mitch may as well don a garbage man neon vest in the second half because he’s going to be cleaning up on those garbage points. Sure he’ll snag you 19-23 points a game, but remember it’s after he floated an INT or two in the first half while he was learning to read a D.

So, I said, “by `I.D. Badge,’ do you mean that packet of cherry Kool-Aid
you stapled to the breast of my nicest suit on my first day?”

The Chiefs are a team I wish was on ‘Hard Knocks.’ They run the Andy Reid recipe for mid-January football bust implosion like no other team and they dumped a QB that made them legitimate divisional contenders and conference foes. Word on the street is Mahomes is the man with a plan and his teammates love him in the locker room and huddle.

Remember that time where you went on a date and you told your friends all about your date’s personality?! Yeah that’s the equivalent for NFL ‘team chemistry.’ What is the best team chemistry? Winning. So yeah, let’s drop in a second year QB who comes from the Big 12, a college conference known for 12 football teams whose battle cry is ‘when is March Madness?!’ Truth be told, they may pull it together (in standard Andy fashion) but the fact is the Chiefs are the franchise that you go to Vegas to bet on when they’ll crap the bed. Football is a physical and (when permitted) violent sport. Chemistry is just some B.S. the GM pushes in case HR is listening in on the press release. This will be a (football) bust bigger than the bust of Kool-Aid man they have at the Smithsonian (probably).

and they said, “haha that’s right, we called it Popping Your Cherry,”

Did you hear the one about Andrew Luck finally throwing an NFL sized football? It’s normally followed by the declaration of ‘the Colts are back!’ The Colts don’t deserve Andrew Luck. Who parks a Ferrari on the shoulder of the highway and expects it not to be crushed, repeatedly? Doctors cleared Luck earlier this year to return to running for his life. Don’t forget the Colts also signed their Plan B head coach of their dreams, in Frank Reich. Look, I like the Colts like the rest of America does, because Peyton Manning was amazing. This is a new era for the Colts. Well frankly, it seems like they’re rebooting Dan Marino’s career.

So I said, “hey guys, these puns are getting
out of hand, I’ll go do the ‘shops right now.”
And now I’ve done them, and now I’m calling a lawyer.

The cycle of sports epicenters is returning to L.A. Last season was one giant middle finger to Jeff Fisher and for that, I thank the L.A. Rams (dude can stay unemployed). Goff was a dud two years ago, and then suddenly hit NFL puberty in the winter of 2017 and wowza, he was amazing. Jared was sidled next to a dreamy young NFL coach who has all these ideas and stubble and the duck-ass hairstyle to show he’s in touch with the NFL’s younger players.

I’ve not seen someone go ‘all in’ as hard as the Rams as I did when my fiend Jimmy “Bull” Bowlinski B-lined across the dancefloor at a junior high student council dance to the girl in the red dress.

When the dust settles in January, the Rams very well could be in the NFC Championship. It’s possible but it’s also possible that the same people who were selling us the Raiders hype last season just packed their magic beans up and went south. Goff currently is 1-1 in the NFL for seasons that were impressively horrific. This year is the rubber match. Game three. Always a pivotal game and we’d wish him well if he were one of those pretentious L.A. jocks.

For more brainy comedy articles with a huge tumor of insight growing inside them, click these links:

Which NFL Team Represents Your Personality? Take This Quiz and Find out

One Comment on “Football Bust Kool-Aid: Who you slurpin’?”