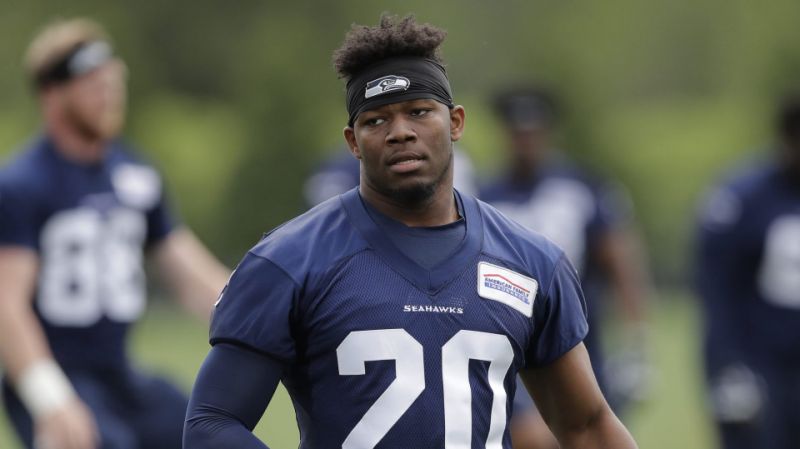 If you are interested in running back battles in training camp, then this fantasy football Rashaad Penny player profile is for you. As we gear up to the start of the NFL season, Football Absurdity is going to bring you a comprehensive breakdown of every notable player that will be available in fantasy football drafts.  When you don’t see us talking about Christine Michael or Mike Davis, don’t get mad at us for neglecting your favorite sleeper.  Get mad at yourself for having bad taste in football players.  We are only focusing on the top-rated running backs in standard scoring and points per game leagues.

With my player profiles, I’ve decided only to go back to look at their fantasy scoring for three years.  I could show you lists from earlier, but most of the guys at the top are no longer in the league anymore.  I’ve also added a chart for their usage over that time span.  We will try to determine, based on those two factors, where the best running back value lies.

A lot of people don’t have NFL stats

Overview:  For fantasy football Rashaad Penny might be my favorite rookie running back coming into this year, after Saquon Barkley.  The way he moves for someone his size is impressive.  Rashaad Penny is just fun to watch.   And Penny is going into a situation where he has no real competition. Even though I like Chris Carson this year, I love Rashaad Penny.  Chris Carson might be the de facto starter at the moment, but Seattle has not invested the draft capital in Carson that they have in Penny.

As I already pointed out in my Barkley article, one of the most telling statistics pointed out to me by Kevin Genson of Beersheets fame is that running backs drafted in the first round of the NFL draft tend to end their rookie seasons as RB1s.  Over the past five seasons, five of eight backs have ended the year as RB1’s in standard scoring and six of eight backs have been RB1’s in PPR leagues.  What this tells me is that teams that draft running backs in the first round want to get the most out of their investment, and do so by running them straight at opposing defenses.

Strategy: At his current ADP, Rashaad Penny seems like a very savvy investment.  You can get him in the last-fourth/early-fifth round of drafts and might end up with a bonafide RB1.  Moreover, you can handcuff him with Chris Carson in the ninth or tenth round, covering yourself for the first few weeks where Penny is in a timeshare, before he finally takes the starting job.

Floor:  What will actually happen is he will fall under the other 37% or 25% of first-round running backs and that means he will end outside of the top fifty at his position, making him and your fantasy roster irrelevant.