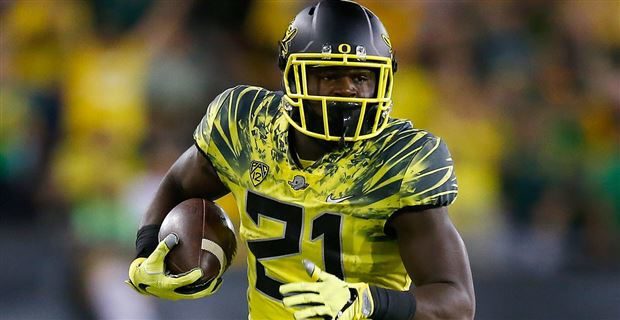 If you are wondering if anything can help the Broncos running game, then this Royce Freeman player profile is for you. As we gear up to the start of the NFL season, Football Absurdity is going to bring you a comprehensive breakdown of every notable player that will be available in fantasy football drafts.  When you don’t see us talking about Christine Michael or Mike Davis, don’t get mad at us for neglecting your favorite sleeper.  Get mad at yourself for having bad taste in football players.  We are only focusing on the top-rated running backs in standard scoring and points per game leagues.

With my player profiles, I’ve decided to only go back to look at their fantasy scoring for three years.  I could show you lists from earlier, but most of the guys at the top are no longer in the league anymore.  I’ve also added a chart for their usage over that time span.  We will try to determine, based on those two factors, where the best running back value lies.

Overview: For fantasy football Royce Freeman is the latest in a long line of Denver running backs that we are supposed to be excited about.  The problem is, I don’t know why this season is going to be any different.  Denver always feels like a murky situation when it comes to their running game.  Even though CJ Anderson was a top ten rusher, he was also one of the most inefficient runners in the league.  Freeman is a very talented back, but my concern is can I trust Denver to recognize he is the best back on their roster?  Judging by their past couple of seasons on offense, that is asking for a lot of faith from me.

Strategy:  I just can’t justify taking Freeman at his current ADP.  While he is the most talented back on the Denver Broncos, that doesn’t necessarily mean he will be utilized as such.  Bad coaches make bad decisions, and the coaching in Denver was terrible last year.  I’d much rather have Golden Tate or Lamar Miller, both of whom are much more reliable.

Ceiling: Speaking solely fantasy footballRoyce Freeman has the talent to be a low-end RB1/high-end RB2 this year if he gets the opportunities.

Floor:  What will actually happen is the Broncos will insist on giving Devontae Booker his opportunity because he has earned it by being bad for a couple of years.  Royce Freeman will be the most talented running back on your bench as you miss your fantasy playoffs.