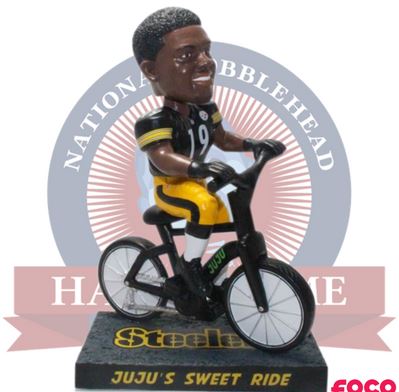 If you want your wide receivers on two wheels, then this fantasy football JuJu Smith-Schuster player profile is for you!

As we gear up to the start of the NFL season, Football Absurdity is going to bring you a comprehensive breakdown of every notable player that will be available in fantasy football drafts.  When you don’t see us talking about Christine Michael or Mike Davis, don’t get mad at us for neglecting your favorite sleeper.  Get mad at yourself for having bad taste in football players.  We are only focusing on the top-rated running backs in standard scoring and points per game leagues.

With my player profiles, I’ve decided to go back to look at their fantasy scoring for only the last three years.  I could show you lists from earlier, but at the skill positions I think three years is plenty to see what a player does.  I’ve also added a chart for their usage over that time span.  We will try to determine, based on those two factors, where the best wide receiver value lies.

Overview: JuJu Smith-Schuster is a favorite this year to break out in fantasy.  It is easy to see why so many people like him.  In the second half of last season, he proved himself to be a game changer.  Going into his second year, a lot of people expect him to break out.  While I love the player, I worry about the opportunities he will get in the Steelers offense.  At best, he is the number three player in that offense, behind Le’Veon Bell and Antonio Brown.

Strategy: My concern with JuJu Smith-Schuster is his ADP.  Right now, he is going in the fourth round of most drafts.  I just don’t feel comfortable taking the third option in an offense, no matter how high-powered that offense may be, that early.  Especially with the changes in the Steeler’s offensive staff.

Ceiling:  It will turn out that my worries about Smith-Schuster’s were unfounded.  He will improve on his rookie season by ending this year as a low-end WR1/high-end WR2.

Floor:  What will actually happen is that JuJu Smith-Schuster will go the way of Martavis Bryant and Mike Wallace, making way for a younger, sexier receiver that we will all fall in love with this year.  Unfortunately, you will have last years hotness on your roster and your fantasy team will suffer for it.