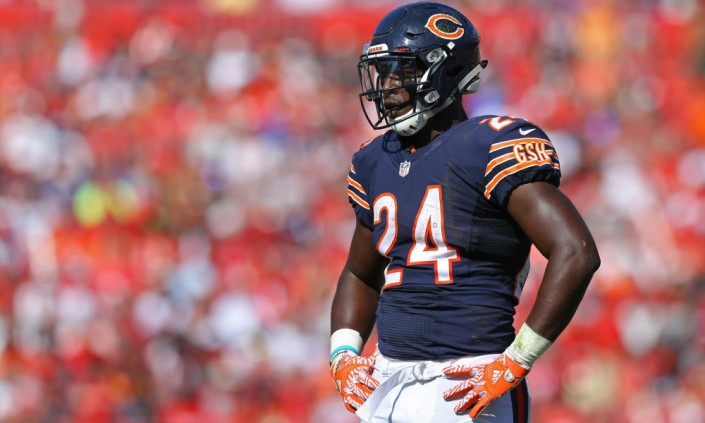 If you are worried about your running backs ability to catch, then this fantasy football Jordan Howard player profile is for you. As we gear up to the start of the NFL season, Football Absurdity is going to bring you a comprehensive breakdown of every notable player that will be available in fantasy football drafts.  When you don’t see us talking about Christine Michael or Mike Davis, don’t get mad at us for neglecting your favorite sleeper.  Get mad at yourself for having bad taste in football players.  We are only focusing on the top-rated running backs in standard scoring and points per game leagues.

Overview: I need to preface this article by saying that I am a fan of the Chicago Bears.  I say this because I am not sure I can be unbiased about Jordan Howard.  Last season, I said that Jordan Howard was being seriously undervalued in relation to his peers.  Turns out I was right.  The only player on my list of running backs ranked ahead of Jordan who ended the season better was Melvin Gordon.  And somehow, Jordan Howard has an even lower ADP this year.  It makes no sense.  Jordan Howard has only ever been a low-end RB1/ high-end RB2.  Moreover, for the first time in his career, he has a head coach who knows how to build an NFL offense.  In standard leagues, he is a no-brainer.  In PPR, the issue is going to be with his hands.  He is a questionable receiver, who will be inserted into an offense that likes throwing to their running backs.  Some worry that he is going to lose a lot of looks to Tarik Cohen.  I am not one of those people.

Strategy: If it isn’t clear already, I think Jordan Howard is being seriously undervalued this year.  He is being ranked with guys like Jerick McKinnon and Joe Mixon, who do not have nearly as strong a resume as Howard.  He is being ranked behind guys like Christian McCaffrey and Devonta Freeman, who he outperformed last year.  Howard is a back you should be looking at in the second round of your drafts who is inexplicably falling to the third round.  At that price, you need to get on that Jordan Howard train!

Ceiling: I think Jordan Howard is going to end the year as a top five back.  He’s been a top ten back the last two years, despite being the only viable weapon on the Chicago Bears offense.  I cannot wait to see what he can do when defenses can’t key in on him.