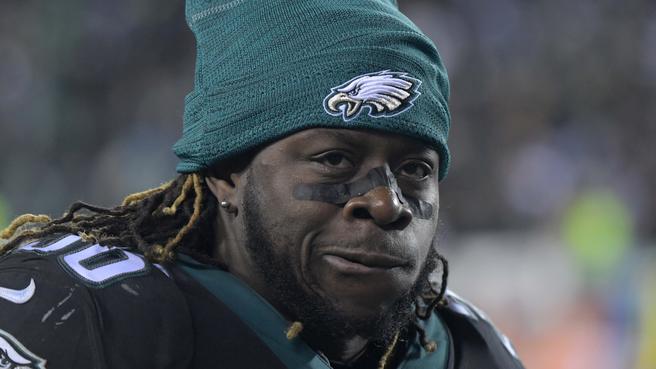 As we gear up to the start of the NFL season, Football Absurdity is going to bring you a comprehensive breakdown of every notable player that will be available in fantasy football drafts.  When you don’t see us talking about Christine Michael or Mike Davis, don’t get mad at us for neglecting your favorite sleeper.  Get mad at yourself for having bad taste in football players.  We are only focusing on the top-rated running backs in standard scoring and points per game leagues.  If you are wondering how important training camp is to running backs, then this Jay Ajayi player profile is for you.

Overview: I don’t really like Jay Ajayi.  As I mentioned last year when I went full homer on Jordan Howard, all of Ajayi’s 2016 hype came from four games where he dominated.  The rest of those games, he was mediocre.  In 2017, he only rushed for over 100 yards twice and only had three touchdowns.  On top of that, he is in a crowded backfield in Philadelphia that has Wendell Smallwood, Corey Clement, and the ghost of Darren Sproles.  When you consider how much the Eagles love a running-back-by-committee approach, I just don’t understand why I am supposed to like Ajayi.

Strategy: At the same spot you could draft Ajayi, you could have your pick of Jarvis Landry, Brandon Cooks, or Golden Tate. Hell, if you just want yourself an Eagle, grab Alshon Jeffrey.  All of those guys have produced consistently at a high level in the NFL.  Jay Ajayi cannot say the same.  Don’t drat him at his current ADP or at all.

Ceiling: I guess if I imagine really hard, I could see Jay Ajayi ending the year as a low-end RB1.  I try not to think that hard because I don’t want an aneurysm.

Floor:  What will actually happen is Jay Ajayi will do what he always does.  He will have two to three amazing games, but those games will only happen while he is on your bench.  Why is he on your bench?  Because he is unreliable!